The 5km ocean crossing from Gozo to Malta 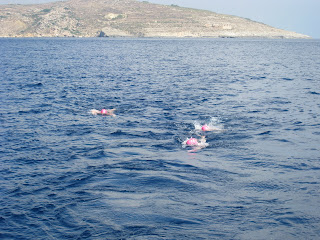 The 5km ocean crossing from the island of Gozo to the island of Malta was scheduled for the middle of the week, pending conditions. The crossing is a swim that goes from Qala Point on Gozo across the North Comino Channel, down the coast of Comino Island and across the South Comino Channel, reaching land at Malta. Quite a challenging swim depending on condtions which change continually throughout the swim due to tides, shipping traffic, killer jellyfish etc.

The morning of the crossing swim we awoke to another glorious day and headed out in our support boat to Qala Point. Conditions were looking good and we hit the water at time stage intervals between the groups. The pink group were last to head off and we had a serious agenda on the table: make the swim in the season record time of 1hr 18mins. This was quite a challenge as we weren't sure what type of conditions would hit us as we went but we hoped that the swimming gods would look upon us. 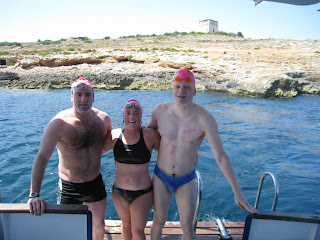 Our crowd of onlookers said it was a great swim to watch, and to be honest, it felt amazing having done it!
We started out with an 800m warm up and then kicked into gear. We figured we would need to do a speed of 4km/hour to make the time and we literally took off. Kept a steady pace for the next 2km. At the half way point, our boat captain Xavier told us we were on schedule for making the time. Renewed with enthusiasm we headed off on the second half of the swim. Sighting the White Tower now all the way, we ramped up our speed at approximately 800m off the shore, at the exact same time a MASSIVE current sweeping us to the left hit. A gap had developed between me and the boys over the distance of approximately 15m, however, I pulled my reserves into gear here and gave it everything. Everyone on the boat was shouting as we were so close to breaking the record and it was literally a hectic 8 mins swimming the final stage. Quite exhilarating!! Hit the shore a fraction ahead of the boys, having closed the gap and our final time showed 1hr 18 mins 13 secs. Wow!

We motored back to the orange and yellow groups who were also still going and the orange group split into a faster and slower group and I dived in to accompany Chris for the final 2km of the swim. I was cheering her on the whole time telling her how great she was doing, thinking 'she is either going to slap me or thank me when this is over'. Luckily it was a thank you and a few celebratory gin and tonics and Moet champagne back in the hotel bar! 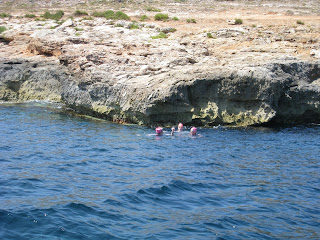 All in all the group did amazing. For most of them, it was the furthest distance they had ever swum so there was a huge sense of achievement around the group that evening.