The quest of steel - becoming a Half Ironman 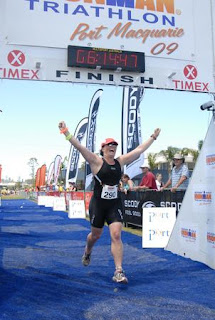 The Quest to become a Half Ironman is not something I would have even considered 12 months ago, but it’s amazing how a bit of team spirit, a post race high after the Half Marathon in May and a few thousand drinks can change all that!

The Beginning: Joining BondiFit a year ago to get back into swimming was the start of it all. I thought I was going to get fitter and faster in the pool and win my surf club swim title. Instead, I got FOMO (fear of missing out) and ended up a tri-athlete! I guess not everyone would get intrigued by listening to the guys in my lane talking about their races, talking about their bikes, talking about weekends away to race, but to me it was this whole new world and one that I wasn’t a part of. What was I missing out on? = Stage 1 of FOMO.


FOMO Stage 2 began when I started running on Saturday mornings, and I would rock up as the cycle session was ending. Everyone had such pretty bikes and cool matching outfits. Cycling started to look like it would be quite fun from a shopping perspective...


And the beginning of 2009 needed a new goal! Ok, time to buy a bike and join in the apparent fun I was missing out on!

Over the next couple of months cycling round Centennial Park (after graduating off clipping in and out on the grass and falling over from a complete standstill much to the amusement of everyone) I started listening to the talk around the packs. Noosa this... Port that... Stage 3 FOMO had begun....it was time to set a triathlon goal, and my fate was sealed after a few drinks and an entry into the “I’m Gunna Book”.

The Training: It wasn’t until Tri Club Champs in May that I realised what triathlons really involved. As it was my first triathlon, I pretty much had a smile tattooed to may face the whole race. But the pain of having to run 10km after sitting on a bike for 30km brought home the fact I would need to build up a lot more stamina and endurance. Port would be a hell of a lot harder. Over the next 6 months I got more and more into training and turned up to more and more sessions, and got yelled at by Coach Spot for more and more things. It was like a drug – even though I was smashing my body, my finances (all the new gear), getting abused (by the Coach), bailing on my friends, I kept coming back for more... I started seeing my training buddies more than my ‘other’ friends and in the last 3 months prior to Port, I was spending more time with training buddies than even my family!

14 weeks out from Port (and following a 3 week sojourn to Europe) I realised that this race was really coming and I better get ready. I actually had a pretty big freak out which was not a bad thing since I ended up pretty disciplined. Having family and friends book the weekend to come cheer meant there was no pulling out... I started increasing my bike and run sessions and began running off the bike after riding on Tuesday mornings to get my legs used to it. Saturdays became ½ day training and ½ day social time before hitting bed early and Sundays became all about a long ride. I swapped dinners with friends for evening training sessions, swapped training data instead of rounds of drinks and before I knew it the race was here.

The Race:
Port Mac really put on the conditions for us on Race Day. It was going to be hot, but the wind was minimal and the tide was with us for the swim. Ate breakfast at 4.30am of a banana and Endura bar and drank a bidon of High 5. My race plan was to take the swim easy and conserve my energy for the bike and run. Nutrition wise I planned on a Gu gel every 30 mins for the entire race as well as an Endura bar and some Gu chomps on the bike to break it up slightly. I had some pre-race guidance from Bennie (B de G) and Spot re: heart rate and my goal here was to keep it lower in the first half and increase in the second half of each leg of the bike and run by approx 10-15 bpm. And overall my goal was to finish in 6hours 30 mins (30 mins swim, 3hr 30 mins bike and 2hrs 30 mins run).
The Swim – 1.9km: 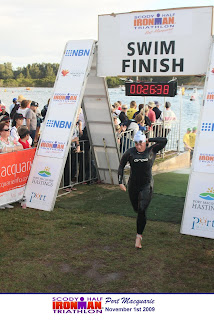 Port has a deepwater start, which is a first for me. Lining up on the line you could feel the current behind us which was definitely a good sign. The atmosphere was pure excitement. Hayley and I got a position right in the centre on the front of the start and before we knew it we were off. The pack veered slightly off course to the right however I held my line and ended up turning the cans in a good position. I had to keep focussed on not pushing it too hard as I still had 6 hours to go after this leg, and Spot had told me over and over not to go hard . Before I knew it I was out of the muddy water and on the finish chute. The sidelines were packed and it was pretty cool having the announcers reading out your name and people cheering, and I was only 26 minutes into the race!


Into transition where I pulled off my wetsuit and got ready for the bike. I do not know what I did for 3 minutes, clearly it wasn’t hurrying. 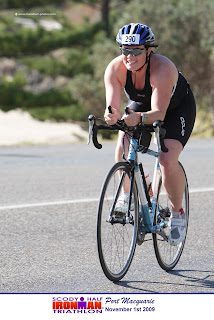 I proceeded to ride and the vroom vroom vroom of the carbon bikes and race wheels as they went past was a continuous drone. For the first hour it felt like hundreds of people passed me, not surprisingly, as it turns out 471 people did in fact pass me on the bike! The course was 2 laps and was quite undulating for the first half of the lap and then a 22km flat section. There is a massive hill on Mathew Flinders Drive which one could describe as a massive cliff face; I looked up to see one rider fall off in the middle of the road... I gritted my teeth and prayed I’d make it. At the top of the hill can only be described as angels in the form of Bourkey, Cam and Spot cheering and yelling and screaming. Although by the time I’d finished the hill I was so glad to be away from Cam and her whistle that I think it gave me all the more reason to get up the hill faster on Lap 2!

I did both bike legs in the same time on the out and only a few minutes apart on the return which indicates I probably did go a little too hard in the first ¾ of the bike, but you can only live and learn.


Coming down the final hill and into transition, it was pretty exciting to finally be on the last stretch of the race. Finished the bike in 3hrs 22mins which was a nice surprise!


There is something quite bizarre about getting off the bike after 4 continuous hours of racing and saying to yourself, right, only 2.5 hours to go. Most people would call it madness. I would have a year ago. I hit transition and it was at this point I realised I had screwed up my GPS on my Garmin that morning and that it wasn’t actually functioning (yes Spot, I know) so spent a frantic minute enabling the GPS so I could get my run time km/min. On with the show and the heat had begun to get intense. 28 degrees and it was HOT! The run was 3 laps up and back of the course which allowed our spectators to cheers for us approx 6 times. Add to that the high 5’s as we passed our fellow BondiFit competitors and there was a lot of distraction from the intensity and pain of the 21km. I tried to start slow and improve as I went but ended up just trying to hang in there. I ran the whole race, and walked through the aid stations. I kept up gels every 30 mins and drank High 5 and water at every station. I smiled for cameras, high fived fellow team mates and left myself messages on my mums video camera of how bad it hurt to remind me if I ever decided to do an Ironman that it wasn’t easy. Finally, after what felt like forever, the big finish sign was ahead, the crowd were cheering, and I truly felt the excitement and the thrill of why I had just slogged myself for 6+ hours. As I crossed the line with my arms in the air, I saw all my friends and family screaming at me! Hayley and Laura were waiting on the line and my parents, my best friend, her husband and their baby were cheering as Cam and Bourkey joined them. I felt so super duper thrilled and happy and in that second all memory of the pain vanished and all I have left is an amazing sense of achievement. 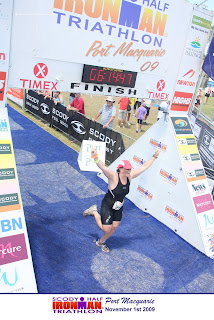 
- Cam and Bourkey yelling and screaming at every opportunity at me as well as playing their ghetto blaster on max volume with our training song “I Gotta Feeling”. Best cheer squad ever!


- Getting those coloured scrunchies and then running past people who had less than me (not many mind you, but it was exciting after hundreds of people had already passed me!!)


- Cam running the final 600m of the race with me and managing to get self portraits of us mid run!


- The finish chute – could you get a more exciting end to a race!


- The fact you get a bowl of ice cream and fruit salad after you cross the finish line – what an awesome surprise!!


A big thank you to Spot, Michaela, Scotty, Paul and Bennie for all their guidance and coaching to get me there and to all my fellow BondiFit training buddies and racers. I reckon the friendships and bonding sessions we have had over the last 9 months have made the achievement all the more special and it was a pretty awesome feeling being able to share the post race high with so many of our team mates. And apologies to Bourkey that we have now ruined the song “I Gotta Felling” for you...