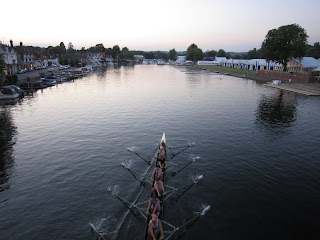 Henley is the most gorgeous little town in the UK. It's famous for the Henley Rowing Regatta held every year where the rowing best of the best from around the world take on each other on the water in crews of eight whilst everyone else dolls themselves up and watches whilst drinking Pimms. Not a bad way to spend an afternoon. 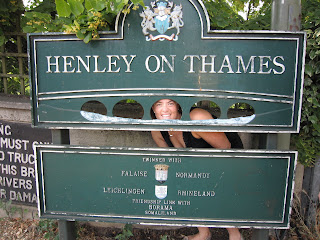 It's also home to the Henley Swim, begun 7 years ago off the back of the Regatta when a couple of rowers decided it would be cool to swim the 2km race course upstream and raise some money for charity. Over the last seven years it has evolved from being a black sheep event into a proper sanctioned swimming race.

The only stipulations are that swimmer numbers are capped, swimmers must swim in the rowing race lane and swimmers must be off the water before the rowing crews start training at 6am. "No problem" said the organisers, "we'll start the race at 4.30am!"


Such an early start of course means there is no public transport available, however there was the option to camp in the field behind the rowing club which my cousin Nicky, her fiancee John and I decided would be fun. Luckily the weather was truly summer and we had an extremely warm and pleasant night. 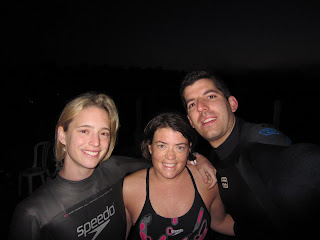 Up before dawn the next morning, our little tent was surrounded by cars, it seems there were hundreds of people who didn't think twice about driving to Henley for a 4.30am swimming race! We gathered at the Upper Thames Rowing Club at 4am, in a "ceremonial procession" (ie: following a person with a lit flame) to make the trek 1.2km downstream to start the race. It was pretty frosty and our toes were quickly numb as we walked along the river. After a quick round of "Happy Birthday" for the race organiser, the men hit the water. The majority were decked out in wetsuits, however there were a group of men in fluro green budget smugglers who were clearly ready to make a statement! 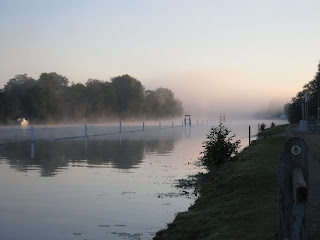 
A wave of "ahhhhs" was heard as the men hit the water, it was actually apparently a balmy 21 degrees in the water! Toes defrosted and 5 minutes later the women were off! 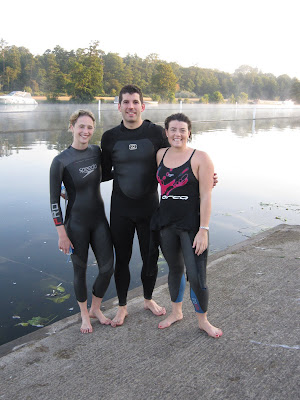 It was quite a different sensation swimming in freshwater. There was definitely a noticeable difference in buoyancy compared to ocean swimming races, and there were people everywhere. After approximately 300 metres the field sorted itself out and then it was a case of swimming along in the murky water trying not to touch the reeds. The trick was definitely staying in the middle of the channel.
Reaching the Upper Thames Rowing Club and passing the halfway mark and then seeing all the familiar sights from this point on made the last km quite enjoyable. The current kicked in at this point and the last sections was noticeably harder to swim, and then before we knew it we crossed the finish.
Again, the Henley Swim provided a different style of finish - instead of running across a finish line, we wore our timing chips on our arms and had to swipe them over the timing mat to finish.
Clambering out of the river on a little stepladder was also quite entertaining! 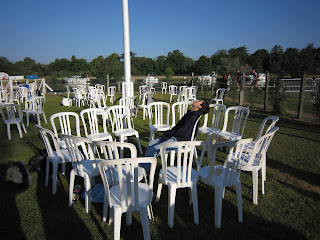 Back to the rowing club for hot tea, bacon sarnies and prize giving. It appeared the mornings events was too much for some. This little guy fell sound asleep in the middle of the prize-giving and woke up to a pile of chairs surrounding him!

A great experience all round!