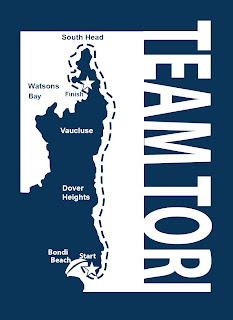 I like big goals. I seem to set one every year that seems way out of my target when I set it and then just go for it. It keeps me going and gives me something to focus my energy into. I also like swimming. I like being in the fast lane with all the boys. I like it more when I beat them. And I love the camaraderie that we have developed across the whole squad. But funnily enough my biggest goal for this year was probably not the one I thought it would be and nothing could beat the feeling I had yesterday when I finished the Bondi to Watson’s Bay swim.


Advertised as a 10km swim – corrected at the Friday night briefing as more like 11km, and adjusted on the day due to insane conditions, tough swells and the fact that our first turning buoy was so far out to sea you could classify it as “international waters”, resulted in an unrelenting 13.5km swim.


However, going into the race I wasn’t really phased:

- The distance was achievable: I had swum 11.75km in the Bridge to Beach Classic 2 months earlier in tough conditions.
- I was fitter, stronger and mentally tougher now having already completed the distance, and this race was touted as only 10km.
- I had a stellar support crew: 3 paddlers and a support boat, plus an on water support crowd who met me at the Heads and followed me in to the finish, and a crowd of friends on the shore awaiting my arrival.
- And lastly, I love ocean swimming. This really was going to be ocean swimming at its best.


How different the race would turn out to be. Swells of 6-8ft on the Saturday at Bondi were mesmerizing. They were powerful. They were insane. There was no way this race was going to mirror the glass conditions we had experienced weeks earlier in the 5km Coogee to Bondi. It’s not until you have experienced the conditions we were facing, over a serious distance, that you realise how much of an impact it can have. But all fears of the race being cancelled were quelled at the briefing on the Friday night: the race would go ahead no matter what – the race director had ordered the sausages, and they weren’t to go to waste! 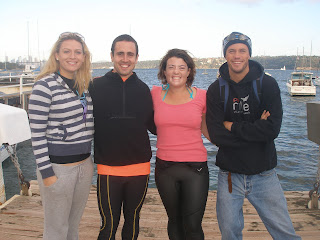 I had lined up a stellar support crew for this “adventure”. Joe Dickson paddling his board, Huw Morgan on racing ski and my favourite Lane 8 swimmer, Amelia on a wave ski, who decided she would prefer to get fit than watch me from the boat so could she also paddle? These guys were my personal shark protectors, nutrition providers and course guides. My support boat consisted of my parents, Chris and Yvonne, my sister Bel, her boyfriend Dimi and my ever supportive rock, Laura. Meals got more than she bargained for and pulled out at hour 3 with serious sea sickness. She joined Dimi on the boat feeding the fish for the morning. I had also coerced a flotilla of land supporters with the offer of cake on arrival – it’s amazing how many people will turn up to eat cake on a Sunday!! So with support in place and a personalised Team Tori race logo, I was ready!


Race day began and the sea was a lot calmer. Still big swells but you could actually paddle out of Bondi, which was a relief for the many paddlers that had signed up to support the 40 soloists and 10 teams taking part.

I met my support crew at Watsons Bay where everyone dumped their cars and we drove around to Bondi together. I set up my race nutrition on the board and skis and got mentally psyched. Standing at the start line, suited in my killer speed suit, I overheard one of the guys saying he felt naked without his suit. I asked him why he wasn’t wearing it, whereupon he announced they were illegal for placing. Having already checked the website and questioning him again, I decided to not take the chance and literally had to bolt back to my car, strip down and pull on my normal cossie and get back to the start with 5 minutes before the gun. Wow. Lesson learnt, no matter what the website says, check and check again.

Solo’s hit the water at 9am and with the rip at North Bondi pumping, I knew what to do. The first problem was that we couldn’t see our first turning buoy, the yellow Coastguard boat, due to the swells. I knew it was off the point somewhere so there was a lot of head up swimming going on trying to find it. The pack was all over the shop, some went left, some went right, I went middle. After swimming so far out it felt like we were en route to New Zealand, I eventually I spotted the boat, got to it, checked off my number and turned left. My paddlers suddenly appeared and we were off! 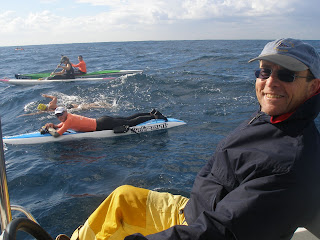 The first 15 minutes were fun. My paddlers were pumped, my support boat were excited, cheering and taking photos of us all in the water, the atmosphere with all the other boats around was electric and we were heading towards South Head. Then, 15 minutes later slight frustration kicked in, I was pretty much still swimming on the spot and Ben Buckler still had not been passed. What the hell was going on!!! When I finally passed that point, I said to Joe, “I thought this moment would never come!”

There’s not much one can say about swimming: one arm goes over, then the other as you breathe, one arm, the other and breathe, you get the idea. I kept a pretty steady pace for the first 5 kilometres and then started winding it up. I was determined to go out easy and come home hard. What I hadn’t banked on was how challenging the conditions were and how that would impact my race in terms of time in the water, and the mental challenge of swimming for almost 5 hours - an hour and a half longer than I had planned to. 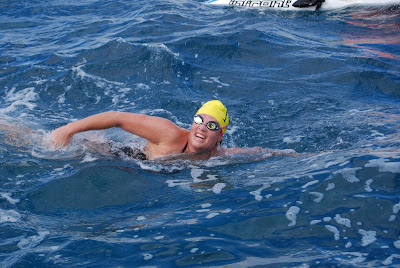 I had a perfect race plan set up with Joe: drink every 15 minutes, and Gu gel every 30 minutes. After about 6kms I started to focus on these breaks. Lasting only about 30-40 seconds, so I could gulp down the contents and keep going, I literally would watch Joe at every breath and be willing him to open the pouch on his board and pull out a gel. People always ask me what I think about when I swim, all I can say on this occasion was I felt like a drug addict desperate for my next fix.


At Diamond Bay, about the 9km mark, with South Head still looming ahead of me and a race time of over 3 hours so far - the time I expected to be finishing the race - I fell into what can only be described as the “Hurt Locker”. I was literally willing myself to get there, for it to be over, questioning why I thought this would be a good idea, asking why did I have to go and swim such a stupid race? etc, etc. I kept turning my arms over and over and tried to find something to give me a lift . 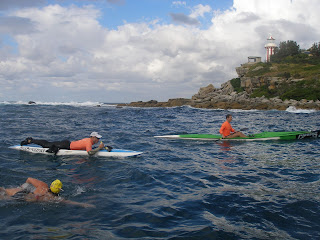 And in those moments of despair I suddenly heard a wild cheering, as a boat load of my surf club friends arrived to cheer me on. I waved, they roared and waved homemade signs and suddenly I felt energised. Next thing I knew Cam Day appeared at the top of the cliffs and was jumping around like a crazy woman waving her arms around. I knew I could do this. Everyone was watching. There was no way out. “Go hard and get home” became my mantra. My godmother’s husband joined the support crew on his ski and then suddenly I was at South Head, rounding Hornby Lighthouse, with Mermaid and Becci escorting me across the reef on boards. I felt like a celebrity: 2 boats, 3 ski paddlers, 3 board paddlers and Cam jumping up and down on the cliffs all the way around. The energy I pulled from everyone was amazing. The cheering got louder and I literally just felt like I was flying all the way home.


One by one I overtook teams and soloists over this last 2 km’s. And as soon as I reached one, I would focus on the next, and before I knew it I was rounding the last buoy heading straight to Vaucluse Sailing Club. I could see the finish line. My emotions were all over the shop, I just wanted to finish!!!! 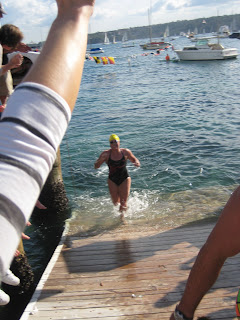 Hitting the ramp and running up to the cheers from everyone was an amazing feeling. It makes me tingle thinking about it now. I was pretty overwhelmed with the support, and having just finished the hardest race of my life (yes it was harder than Port Mac Half Ironman 2009) I was so glad that I had everyone there to share that amazing feeling.


My paddlers and boat crew joined the celebrations on the wharf. Mum pulled out an amazing post race spread and everyone gorged themselves on chicken legs, brownies, slice and dips. The photos say it all. Thanks to my sister’s stroke by stroke shots you can get a sense of the conditions we faced and thanks to Tilly, I have a record of almost every minute post race and it’s pretty clear how overwhelmed I was. 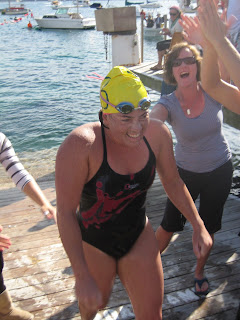