South Head Roughwater is an annual 12km swim from Bondi to Watson’s Bay. In 2010, the conditions for this race were particularly brutal. I had only just begun long distance racing,  and having completed the Harbour Bridge to Manly swim 6 weeks earlier in delightful conditions, I had no idea how bad it could get. I expected a 3hr 30 race, and ended up finishing in 4hr 44 mins. I was one of the lucky few who came in under the five hour limit. Majority of the soloists either got pulled out or missed the cut off time.
Following the hellish experience of 2010, I spent the next 12 months focussing on conquering distances and had achieved some pretty decent results, and so it was with a mixture of excitement and confusion that I embarked upon the 2011 South Head Roughwater. 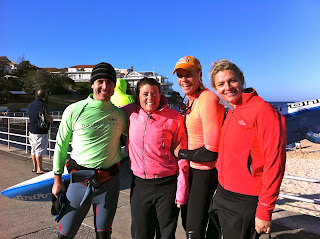 Excitement, because (i) I had my whole 2010 “Shark Protection Unit” committed to paddle with me again; (ii) there was no way that I could be any slower than my 2010 time - I was now a much faster swimmer and had done a huge amount of training (iii) there was no way the conditions could be any worse than 2010.
Confusion because, having now conquered distances that are twice this race, it was no longer about just finishing, now I needed a new  focus to race on. Lucky for me my housemate and good bud Matilda sat me down 2 days before the race and quizzed me about these things. Being a triathlete, she is pretty switched on when it comes to racing head space and I am pretty sure she could see that I was a little lost with what I wanted to achieve. After approx 90 mins of drilling down I reached a decision: this race was going to be about speed. I was going to go hard and fast and see just how long I could hold pace for. There was some serious competition entered for this race which I was aware of, and more that I wasn’t, and I knew position 1 and 2 were pretty much guaranteed to two other swimmers whom I train with so my focus then became to take out third. 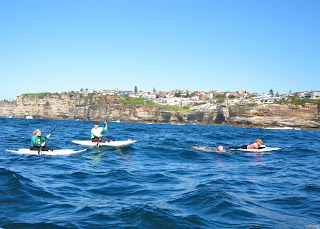 Preparation was essential, as always. Having done the course the year before, my boat crew had learn a lot. My paddlers had learnt a lot. And I had learnt a lot. The night before the race my parents, Joe and I sat down with the charts and mapped out our plan. We examined currents, tides, and expected conditions and made plans around this. Until the day, you don't actually know what plan will be used because the conditions on that actual day always dictate this, but we prepared accordingly and I put the race in my crews hands.  This is probably one of the most important things I have learnt over the last 12 months of distance racing: your crew run the race, I just swim. So my goal is to swim the fastest and best I can, while their goal is to get me there in the best possible line according to the conditions. Obviously being in the water I can feel currents etc which I communicate by yelling out in between breaths or backstroking a few strokes while I talk but in the main I have realised that the crew above the water can see the course and the lines better than I can from water level, and I have now learnt to trust in them. Having a rock solid crew such as my parents who have done all my races (bar Fiji) and Joe who did this race in 2010 and Rottnest Channel 2011 (22km) with me definitely helps, as well as having great friends like Huw and Meals back again for entertainment and support. 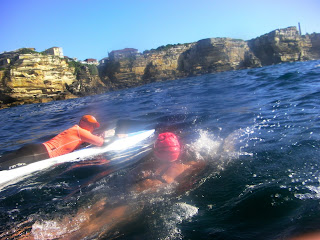 So the race day dawned and it was freezing. Literally 8 degrees on Bondi. We arrived at Bondi and there was no way I was taking off my tracksuit and ugg boots. It was literally too cold. 20 minutes before the race and I was still fully clothed wondering what on earth I was  going to do. I still had to vaseline for chaffing and apply wool fat to my shoulders and arms for warmth and I really didn't want to take off my clothes. Thankfully the surf school “Let’s Go Surfing” at Bondi, where Joe is a part time surf instructor, welcomed me in and let me prepare in the warmth of their shop. I was literally running down the beach with 2 minutes before the gun went and had all of 30 seconds to adjust my goggles before the start. And we were off! I had a solid swim straight out to the marker boat which thankfully wasn't as far as New Zealand this year, ticked my name off and headed for Ben Buckler as my paddlers found me. Some swimmers weren't so lucky, and I temporarily lost Meals to another swimmer, the Warrior, whose paddlers hadn't found him and whom needed some support/shark protection until they could be located. 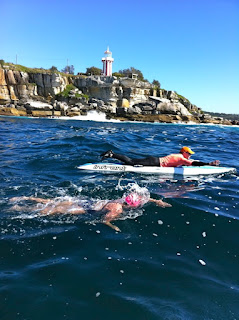 Meanwhile I swam. Instead of my usual warm up pace for 4-5km and then hitting it for the rest, I decided to start hitting it pretty much from Ben Buckler (2km). Joe and I had decided that the best way for me to measure my speed and therefore judge how I was going continuously through the race would be to get my 1km splits. I always have a record of them as the GPS is in my cap, but I don't normally know the exact times until after the race when I look at the data. This race Joe had a watch on as well and every time the kilometer would buzz in my cap, I would yell the km number out to Joe and he would take the split on his watch and then read it back to me during my breaths. This in turn motivated me km on km as I knew exactly how I was tracking the whole race. And hearing each km split motivated me to swim harder and faster than before. The first 9 km’s most splits dropped. This was awesome. And I was so pumped!
It wasn't until Diamond Bay that I hit my first lot of current - and boy was I surprised. What I hadn't realised was that I had swum so much faster than expected that I hit the outgoing tide at Sydney Heads. We had expected to arrive as the tide turned which would have meant no current against me - however this was not the case. I had a few kms there where I really had to push through. And once I pushed through I was in Sydney Harbour - a whole 3 degrees in temperature colder than the ocean. It was freezing. Well probably only 17 degrees, but it was so cold. At this point I was really looking forward to finishing.


With only a few km’s to go, and my team supporting me strongly, we welcomed more cheer squad to the party. Bloka brought his putt putt out to meet us at the heads with Tilly and her Mum. I could hear Tils yelling across the water at me and waving her arms like a crazy woman, it made me laugh so much underwater and was a welcome distraction from the cold.

I pushed on determined to drop my km splits even though I was against the current and the times were pretty hard to move, and flew home for the last km once I passed the final check point boat to the finish. As I arrived at the wharf with my team around me, I could here a very loud “Go Tor” which turned out to be my sister. Thankfully she had just arrived in time having run the Half Marathon that morning. The rest of my support team arrived over the next hour - I was way earlier than expected and after last year’s epic race, no-one had anticipated such a speedy arrival! 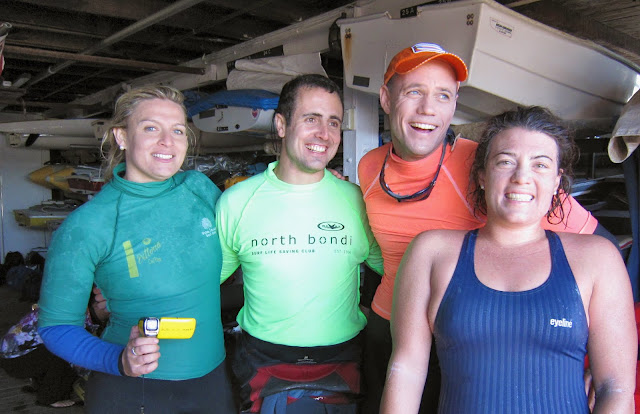 It is a fantastic feeling finishing a long distance race. And I was stoked to see my race time at 2hr 52 mins. Far faster than ever anticipated and almost 2 hours faster than 2010. I also placed as third female, 8 minutes off second and 17 mins off first, which was awesome. 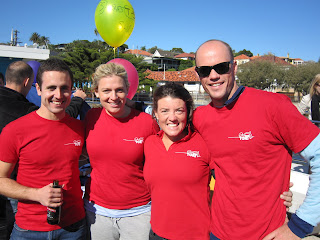 It definitely satisfying when all the training over the last 12 months can be clearly seen in the results! I have a huge thankyou to all my rockstar support crew: Mum and Dad for their boat and navigation skills, Joe for being managing my feeding and timing, Meals for managing to capture the whole adventure in video and photo, and Huw who still paddled for me even though he had an injured arm. This race is such a festive race for me because of the crew and having the same support crew for 2010 and 2011 was such a great feeling. There was no way that 2011 would be anywhere near as bad as 2010, and as a result I was stoked to be able to have everyone there again and part of a race with much better conditions! Hearing laughter and banter as I breathed and fed made me laugh underwater the whole way - they were so entertaining to watch as I swam!
Massive thanks to all my friends from BondiFit, VladSwim and the rest of my worlds for making it down to Vaucluse Sailing Club for me. It was the most fabulous afternoon in the sun cheering swimmers in and stuffing our faces with the copious amounts of slices and cakes Mum had baked.
This was definitely my favourite and most satisfying swim to date!
Kilometer Splits:
1km:  13:06
2km:  14:51
3km:  13:23
4km:  14:04
5km:  14:09
6km:  14:05
7km:  13:51
8km:  13:47
9km:  16:07
10km: 14:52
11km: 16:50
12km: 13:25
Total: 2hr 52mins, 3rd female, 9th overall out of 35 swimmers.