12 months til I swim the English Channel - OMG!

It’s officially 12 months out from my English Channel swim. Hard to believe that a year ago I popped down to Dover Harbour to check out what the madness was about and see if I could handle the cold water and ended up doing a 5 hour swim with all the Channel swimmers training for their own challenges. When I booked my slot two years out, I thought it was a very, very long way away.... now with less than 12 months to go til I hit Uk shores again, it’s quite an exciting and scary reality. Yes I am really doing this! Ill be updating regularly on this journey and I am aiming to raise $25-50K for Multiple Sclerosis as part of my challenge. Subscribe up on the top right to receive email updates.

The English Channel is the Holy Grail for long distance ocean swimming. An expanse of 34km directly across the shortest points from England to France, it is a challenge that only 1069 swimmers have ever completed successfully, 69 of those being Australian.
Between 10-18 July, 2012, I aim to join that list of successful solo swims from England to France, enduring approximately 12 hours of continuous swimming in water temperatures around 15 degrees Celsius, wearing nothing but a standard swimsuit, a silicone cap and one pair of goggles. I am not allowed to touch anyone, or any boat during this entire time.
The English Channel: 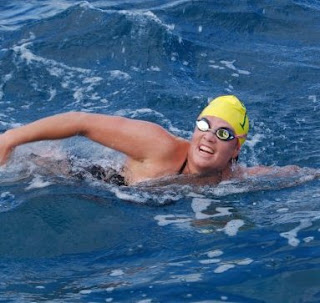 Swimming across the English Channel has a fail rate of over 60%. It is one of the most challenging swims a long distance swimmer can do, as it also the world’s busiest shipping lane, with over 500 ships a day passing through it. Channel swimming began back in 1875, when Captain Matthew Webb made the first observed and unassisted swim across the Straits of Dover swimming from England to France on 24 August 1875 – 25 August 1875 in 21 hours and 45 minutes.
Since then 1069 swimmers out of over 7000 attempts have made the solo crossing with a number of these doing multiple crossings and only three whom have ever made a three way crossing. Crossing times vary dependent of conditions, speed of swimmers, and the tides.
Whilst the shortest distance from Dover to Cap Gris Nez (the headland halfway between Calais and Boulogne) is 34km (18.2 nautical miles or 21 land miles), most Channel swims clock up distances more in the vicinity of 45km’s due to the strong tidal flows which sweep swimmers from side to side throughout the duration of their swim. Swimmers must be aware of and give caution to the 500+ ships traveling through the channel daily as well as ferries, seacats and jetfoils crossing between England and France at regular intervals. There are also plenty of hazards in the form of seaweed, flotsam and jetsam (rubbish, timbers, etc) and a fairly solid swell which can get extremely choppy in winds.
The hardest and toughest condition of all though is the cold. In July, the water temperature sits at about 15 degrees Celsius. Whilst the daylight hours are longer, the water temperature is colder than say in September, when the water is warmer but the day is colder. Many swimmers pull out of the Channel due to hypothermia and it is due to this fact that fewer people have achieved the glory of crossing the Channel than have conquered Everest.
Swimmers across the Channel are escorted by a certified Channel escort boat which is chartered by the swimmer to ensure their best chance of success. The pilot is responsible for plotting the course and taking into account the weather and conditions for the swimmer and is also responsible for ending a Channel swimmers dream if they are showing signs of hypothermia. Their experience and that of the crew is there to monitor, feed and encourage the swimmer and ratify the completion of that journey when French soil is reached.
My Challenge:
12 months out from the event and my cold water training has begun. Every weekend I am clocking up the kilometers and hours in cold water at Balmoral (currently between 13.9 degrees C to 15 degres C) and Bondi Beach, whilst training 30-40km’s in a pool during the week. I also undertake gym sessions and have a number of races on my calendar over the next 12 months working towards the 45km distance.
In August I will be swimming 19km’s solo from Fiji mainland to Beachcomber Island, followed by a 15km open water swim in Hong Kong in October and then Rottnest Channel (22km) in February 2012. Over the last 12 months I have a raced distances totalling 89km’s and have placed third female in this years Bondi to Watson’s Bay swim (12kms), third female in Fiji in 2010 and also third female in the Sydney Harbour Bridge to Manly swim (11kms) in 2010. I also completed the Rottnest Channel earlier this year in 6 hours 23 minutes, coming in as 14th female.
Whilst setting out to achieve this massive feat, I am also going to be raising money for Multiple Sclerosis. Whilst I will self fun my trip and challenge, my goal is to raise somewhere in the vicinity of $25-50K for MS so that others may benefit from my madness!
Check out my online donation/sponsorship page https://www.gofundraise.com.au/page/torigorman