Back to Beachcomber: Fiji Swims wrap

For the third consecutive year, I packed my swimsuit, cap and goggles and headed for Fiji to participate in the annual #fijiswims. 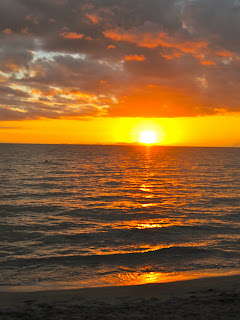 Renowned as “the most beautiful swim in the South Pacific”, 2011 did not disappoint. This year I once again entered the 19km swim as a solo swimmer followed by a 2.7km race 2 days later. It was pretty hard to knock back a week in the sunshine with crystal clear waters and “fiji time” when Sydney was suffering under a cold, wet winter where everywhere I turned I was greeted by coughing and spluttering sick people. Many of my squad also signed up, and when my sister, Bel, said she would come too, the trip seemed perfect on paper.
Arriving in Fiji, we were hit with the heat of 30 degree days. Heaven! We arrived at the Sofitel just in time to see squad member Louise Stevenson complete her 38km double crossing from Denarau to Beachcomber Island return. Louise was swimming in aid of her hometown Christchurch which has suffered horrendous earthquakes this year. It was an incredible effort and one which she completed in an incredible time of 9hr 45 mins. Inspirational! As we watched her finishing, I looked out to sea and saw that conditions looked good for our race the following morning.
After meeting our boat captains and attending the race briefing, we headed to our pre race banquet dinner. It was an excited atmosphere. There were people I had met in previous years to catch up with, Sydney squad members from both my Vlad Swim Squad and BondiFit squad who were attending their first time, and a whole lot of new people who were pumped. Dinner was great. We discovered our new favourite Fijian dish, Kokoda, which is raw fish cooked in lemon juice and coconut milk - amazing! This discovery later inspired Jess, Bianca and Elayne to go fishing for a day and catch some fish themselves and make their own Kokoda. Amazing!

The next morning was Race Day! We were up early and headed down to the beach, still kitted in my hotel robe, to drop off all the equipment (gels, food, pre mixed hydration, shark shield) and then checked in with the starters. We then headed back to the kayak to set it up, met my boat owner who was liaising via mobile with the boat captain and went through the race plan with Bel. And then after a few happy snaps, it was time to go!

Fiji swims 19km has a few waves of starters. The solo swimmers were wave 3. Conditions looked perfect. Hardly a ripple that we could see from the shore, however that would change as we rounded the island immediately on our left.

We all started at a fairly even pace, except for Justin and Iain who went out strong. When we hit the channel marker buoy at about 1.5km’s we were all still in a clump, and from here the spread began. The field all swam right, except for me. My captain said that down to the left there would be a current, and whilst I would have to swim further, the current would push us onto Beachcomber Island faster, so we went left.

The next 4 hours were all about swimming, arm over arm. From the second hour I started vomitting constantly. It was worse than normal (I have a pretty sensitive tummy) and couldn't keep any gels down, so I stopped eating. I kept drinking every 15 minutes, but even most of this would come straight up. It was not very pleasant. At the third hour my hips started to really throb as they were pretty tight and locked up from the City 2 Surf race the week before. I started eating again after this as I was starting to feel really weak and tired. I switched to caffeine gels in the hopes it would re-energise me and started really focussing on my stroke. I was craving a red bull or coke, but unfortunately had none. It was around this time that I realised I still had at least two hours of the same to keep going... it was not a happy place. Looking at my sister paddling along next to me, I knew that I couldn’t pull out. You don't come all the way to Fiji to stop swimming halfway through the race, and what I had to keep telling myself was that no matter how hard this race might be, it was going to be nowhere near as hard as the English Channel next year! 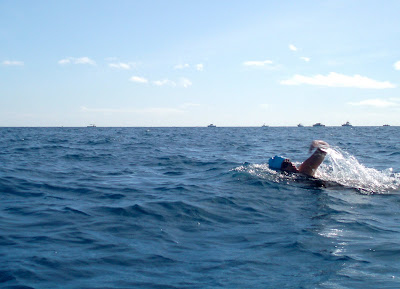 So on I went and my kilometer splits started to get faster again again and I sat on a nice solid pace for the next hour. We had been inline with the fleet this whole race, and although we were very wide and I wondered at what point we would come back together and how we would be placed. I was sitting on average of 16 min km’s which was pretty solid and we had absolutely no current assistance behind us - a far cry from the year before when I was pushed onto the island!

Finally we came back together with the fleet, and unfortunately the fleet was all ahead of us. The promised current had never come, and in fact I had even hit a bit of a head on current for a couple of kms, I was gutted. We had about 3kms to go, and I focussed on swimming strong, and reducing that distance to the others. Finally 1km off Beachcomber I overtook my coach, Vlad, but there wasn't enough distance to catch the others. I finished in 5th overall, 2nd female.

Upon finishing the race at Beachcomber, we were greeted once again by all the island staff singing and cheering. I was amazed to see how many of them remembered me from last year, and there was hugs and kisses and "bula"'s everywhere. It was awesome.

Overall, my time was faster than the year before, which was a great indicator of the gains I have made over the last 12 months. Massive thanks to Coach Vlad for his constant and dedication attention to my training, preparation and technique. 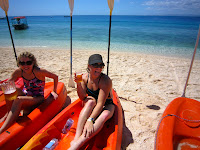 We partied hard on Beachcomber Island for the following 4 days, I don't think I got more than 5 hours sleep a night, and my body probably didn't deserve the punishment it got from all the cocktails I drank in celebration. The best part was definitely having my sister Bel there with me, as well as all my swimming friends. I still cant believe she volunteered to kayak next to me for over 5 hours and look after my food, hydration and timings this whole time. Amazing! I can't thank her enough! We then had an amazing holiday together afterwards.
Two days after the 19km swim, we raced a 2.4km swim, and it was here that the partying took its toll. I struggled to get my speed up and although still a reasonable result, it was the most painful swim I have ever done, my shoulders had clearly had enough! Bel also swam this one and did so well. Hopefully this is the start of her ocean swimming career/holidays!

Next race is on in a few weeks: 15kms in Hong Kong, known as “The Clean Half” and yes apparently the water is safe enough to swim in and all the sharks have been fished out. My brother Mark will be paddling for me in this race - it really is becoming a family affair and I am extremely lucky to have such an amazingly supportive family. Thank you! From there it will be all systems go for Rottnest 2012, and then onto the English Channel. It’s going to be a big 10 months! 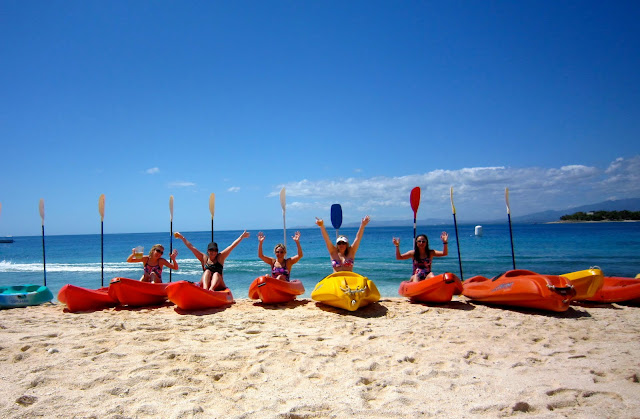