The Hong Kong “Clean Half” swim race has been in existence for the last 9 years. The 15km course stretches from Stanley Beach to Deepwater Bay and has some pretty cool scenery. This year it also had a fair amount of extra obstacles in the form of a windsurfing race that started at the exact same time as our swim, and a sailing race crossing the last 4kms of our course. It certainly kept my support crew on alert!
I first heard of this race last year through my friend Emma who lives in Hong Kong, and when my brother was transferred to HK in March, it seemed like a great opportunity to get over there and visit them, and do a new race on the long distance swimming circuit.
I was also fortunate enough to know that my brother, Mark, despite not training specifically for this race, would be happy to sit on a kayak for 4 hours and support my race. I am extremely fortunate to have such an amazing family, and Mark stepped up where my sister Bel had finished in Fiji to take on this challenge.
So the first challenge was finding a kayak that he could paddle for the race. Here we were fortunate enough through Emma to be put in touch with a HK local, Paul, who indeed owned such a kayak. Over email he generously agreed to lend me his kayak for the race and Mark met up with him pre race to work out the logistics of collecting it. The kayak was stored at the race finish which would be extremely convenient after the race, and we decided the easiest way to get the kayak to the start would be for Mark to paddle it there. The paddle would take approx 2 hours, and since the race didn't start until 11am, we decided this would be the best way to do it, whilst also giving Mark and opportunity to check out the conditions for my race.
I had arrived in Hong Kong the weekend before the race from Sydney as we had a long weekend, and I thought it would be a great opportunity to catch up with my brother and friends and acclimatize. Hong Kong was incredibly humid and having left a freezing cold Sydney, I was very grateful for this acclimatization period.
In fact Hong Kong was so warm, the water temperature was 25 degrees!! Having come off the back of my English Channel training in sub 15 degree water, my body was definitely in a bit of shock.
In the week before the race I was lucky enough to be able to train with the LRC club thanks to my reciprocal rights of a club in Sydney. The team at the LRC are super enthusiastic with 11 teams competing in the race, and their coach, John Dempsey, and the rest of the squad made me very welcome over the course of the week. My brother actually said that during the race some of the LRC support boats would come over during the race to ask who the swimmer was and when he said “Tori Gorman” they would cheer and say they had swum with me that week. It was awesome having such a great amount of support in a country where I knew very few people a week earlier!
Race morning arrived on Saturday 8th October, 2011, and Mark was off at 7am to Deepwater Bay to get the kayak and paddle 2 hours to Stanley Beach where I would meet him. I stretched and ate brekkie and packed up my gear for the race. It is amazing how much stuff one needs for a sport as simple as swimming, but when I laid it all out I was amazed at all my supplies: gels, hydration tablets, shark shield, Vaseline, ropes, tape, spare caps and goggles, drink bottles, sunscreen, zinc, food, jelly, and chocs.  I packed up and got in a taxi and headed for the race start. It was a hot day! I was dripping pretty quickly! Mark arrived at the same time as I did and we began setting up the kayak. He had a few mates doing teams so we chatted to them and then we headed for the race briefing. The course sounded pretty straightforward and we were lining up on the start and then go! 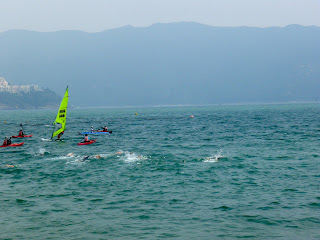 At the same time our race started, a windsurfing race also started, right on top of our course, our first obstacle to overcome. It made for some quick navigation and protection from Mark, and we headed on. This was where we hit our second obstacle for the race. Mark couldn’t see the buoy! All we knew was that it was red and on the other side of the bay and we couldn't see it. The water was extremely rough and choppy so I didn't stand a chance, and I kept yelling at Mark “Can you see it?” and he would reply “No”. Finally once we were halfway across the bay, I yelled at him to go ask another boat where the buoy was and I swam on alone. He came back telling me all was good, truth was he still couldn't see the buoy. This was due to two things: 1: he is red/green colour blind!!! Something we hadn't even considered would be an issue!!! and 2: the buoy was actually so big it had a band standing on it playing music!!

After these little hiccups, I finally rounded the buoy and headed out to the headland. This was the worst stretch of the race for me. Current was pushing against me, the water was really choppy and I drank endless amounts of the sea water.... I was really not enjoying it for a good hour there. But when I finally hit the point and looked up to see satellite dishes towering above me, I reminded myself how cool this was and how lucky I was to be able to do this. I made it through the corridor known as “Chunder Alley” to the locals (sans chunder from me) and started to really get a groove on. It was at this time that a team racing came alongside me and I began to use these guys as pacers. Every time I would stop for a feed or drink they would overtake me and then I would wind them back in again. It was fantastic to have these guys and they had some good swimmers who really kept me at pace. 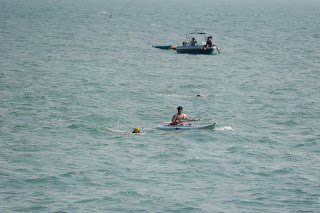 We had ideal conditions for approx 45 minutes before we were back into the chop and swell. Because my stroke kept changing from short strokes in the chop, to long strokes in the flat, my muscles all over got an extreme work out. I was pretty impressed with how well my body held up, clearly the cross training has been working.
Mark was doing a great job paddling for me and keeping track of my kilometer splits. He also kept my feed stops at perfect intervals. Since the water was so hot, I was pretty dehydrated permanently so I made sure I didn't scrimp on the liquid at all. We also tried a few different race foods this time. I used Gu Chomps for my third and fourth food stops and then a Milky Way bar on the 5th and I used Coca Cola from the 150 minute mark to keep my caffeine levels up and the sugar intake high. This was a wonder drug for me and amazingly this was the first race where I didn't vomit continuously, even after having drunk all the sea water in the first 4kms. 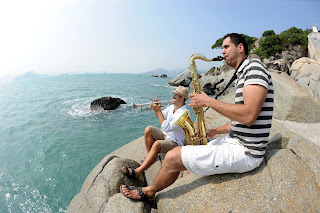 The rest of the race continued at pace, we rounded the island and there was a group of music makers playing on the pier for us which was pretty cool, and finally we were on the last 4km stretch. A yacht race surrounded us and I was still neck and neck with the team which I was determined to beat, and I started winding in and overtaking a few more teams and a couple of solos until before I knew it I was on the finish line. We were met with a trumpeter which was cool and it was all over! 15kms in 4hrs 4 mins, 4th overall out of 13 men and 1st female. I also beat 24 teams. I was stoked! Although I didn't actually find out these results for a couple of days.
There was a BBQ on shore for all participants and I caught up with the LRC guys after the race who were all awesome and then Mark and I headed out onto a Junk with some of his friends after the race and then went out in town for some celebratory drinks, but we were both shattered by 10.30pm and tucked in bed. The morning after the race I treated Mark and I to full body massages in Central which were throughly enjoyed!

I was so fortunate that Mark was able to paddle for me and do such an amazing job and also to be able to borrow the kayak from Paul and train with the LRC Club. Thank you so much to all these wonderful Hong Kong locals who made the race and experience so fantastic. The race itself was great fun, and little bit different having bands located around the course for entertainment. There were also a lot of support boats and Junks which was fantastic and the atmosphere was really enjoyable for all. The water temperature being so warm, definitely was not pleasant for my now cold water conditioned body, but it was good to challenge myself again in conditions that are not ideal. I was really stoked with my time overall. I was aiming for 4 hours, and considering the rough conditions for the first 5kms I was surprised to be able to hit my target, however, having the team to pace against, definitely helped lift my performance.
My next distance race is Rottnest Channel on February 25, 2012, some 20+kms, followed by the English Channel in July 2012.
I am definitely feeling really happy that my 4 weeks solid race prep post Fiji and pre HK worked and have a lot more confidence in my racing at speed over distance. Each race keeps building that confidence and experience! Onwards and upwards!!
Read more on
http://www.thecleanhalf.com/home.html
http://www.dailynewsofopenwaterswimming.com/2011/10/it-was-music-to-their-eyes-in-clean.html
http://cscsupport.blogspot.com/2011/10/clean-half-open-water-challenge-2011.html
http://www.thecleanhalf.com/CleanHalf-full-results_2011.pdf