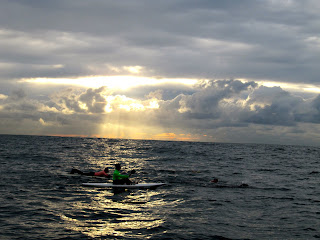 Palm Beach to Manly is an iconic stretch of coast on Sydney’s northern beaches. Being a volunteer surf lifesaver at Palm Beach for the last 12 years, it holds a special place in my heart.
Every year this stretch of coast between Palm Beach and Manly hosts an annual ski paddling race along the 20 beaches, and ever since I began long distance swimming I have thought it would be an awesome course to swim however, my innate fear of sharks has kept this desire on the back burner.
That was until about a month ago when I received an email from a friend I trained for the Channel with last year. Iain McGregor said he was going to organise a crew of people to attempt this swim on June 2. Was I interested? I forwarded this on to my support crew to lock in boats, paddlers etc and decided, yep, this would be a killer swim! The diary was clear as I had already scheduled an eight hour training session for this day, so a little bit more wouldn’t hurt! 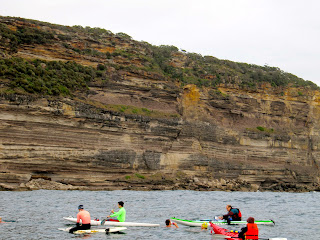 This 28km stretch of coast is quite serious though. There was no way I was going to do this without some serious safety in place. My parents and I banded together some amazing support through mates at Palm Beach Surf Club who offered to drive an IRB and a Jetski for us on the day. Swimming with me would be my Channel training partners, Wayne Arthur and Alistair Newmarch, and Anna Torok who is training for Lake Zurich swim in August. Between the four of us swimming we had five paddlers, a boat, an IRB, a Jetski, and a land patrol following us, and we definitely needed all this support, especially as events later in the day unfolded.
The week before, my crew ran a safety briefing, there was no stone left unturned. Every contingency was considered.  My amazing parents thought of everything and they even borrowed nine shark shields from their mates, and packed flares. I was extremely confident that with such a strong support crew positioned around us four swimmers, we would be well covered if anything went wrong. 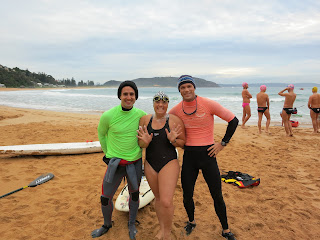 The 7-day weather looked ok. Light winds, max 10 knots, currents looked manageable, however light afternoon showers were forecast. The weather on the day was just about as forecast, except for the rainstorms that came through were very wet and heavy, and closed off all visibility of land at one point. Thankfully Dad was navigating with GPS so we were fine. The winds and sea also picked up as these mini squalls went through.
The day began early, alarm sounding at 4:15am, a quick breakfast and out the door by 5am. Joe and I drove to Manly to leave a car where we met Huw and all drove to Palmy together. Mum and Dad went separately to Newport where our boat is moored and then drove the boat to Palm Beach ferry wharf where we met Wayne, Ali and Anna with their food and supplies for the day. 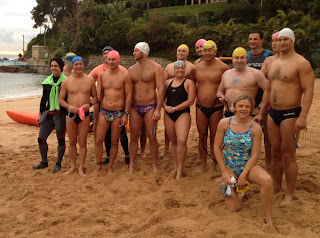 After loading all the gear on board, the swimmers and paddlers drove around to Palmy where we met up with the other groups of swimmers. We all left the beach together after a quick pre swim photo. That was pretty much all we saw of them, as our pace was a lot faster than the other groups. Our plan was to swim out far off shore while the other groups were taking a more conservative swim inshore along the beaches. 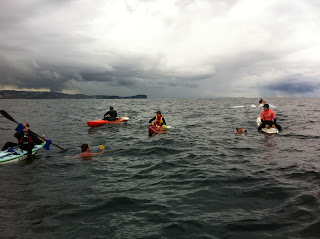 We set off at 7am from Palm Beach. The conditions were lovely. Wayne, Anna and I swam side by side, while Ali went off on a rogue path, to be shepherded back to the group by his paddler at Bangally headland. From this point, the four of us were never further than 50m apart for the entire swim, and for most of the time we more or less within 10m of each other. That is very impressive when you consider we were swimming a distance of 28kms for over 8 hours, yet testament to how importantly we viewed safety. The pace was solid for the whole swim. Wayne and I swam side by side, stroke for stroke, pushing each other the whole way. It was awesome, and we actually ended up sitting on race pace the whole way.
Our group broke every 30 minutes for drinks and food. Each swimmers paddler managed their nutrition while extra food was stored on the boat. Our paddlers were amazing! They never stopped smiling and kept the banter going throughout the breaks. Skis, boards and kayaks are not the most comfortable apparatus and it’s very tough on the body to paddle for eight hours, even if the pace is slow. And it must not be forgotten that it was cold and it was wet!  Massive shout out to Joe and Huw who rotated paddling for me, Russell and Jenny who did a swap halfway through the swim for Ali, Ryan who paddled the whole way for Wayne, and Millie who paddled the whole way for Anna. When you are putting yourself through hell physically and mentally, it makes a world of difference knowing that your support crews want to be there with you every stroke of the way. 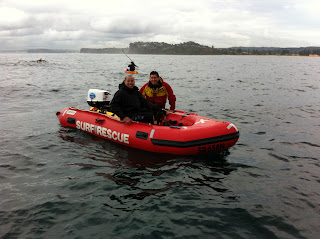 Our boat and Jetski crew were also having an awesome time. James posted his first ever photo on Facebook, of me swimming, and was loving the responses flowing in. I would get updates every feed that there were heaps of “likes” and comments. Nathan and Arsenio also enjoyed “checking me in” on Facebook in the Pacific Ocean. These guys epitomise what surf club camaraderie and friendships are all about and I was so grateful to have their support out there to achieve my biggest ever swim to date.
At Whale Beach two whales surfaced 50m in front of us, surprising our crew and themselves. Other whales were breaching off to the left delighting our crew. It was a magic morning. We headed quite far out to sea in order to get a transit to clear Long Reef comfortably. Luckily this meant we missed some of the early storms that were sweeping through the beaches. It was quite surreal watching the rain sweep down the coast while completely missing us. At around midday, our luck ran out and the rain hit us hard. 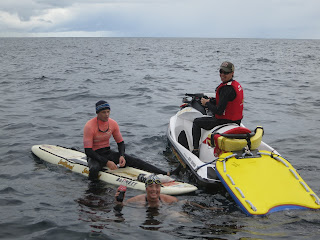 It was around this time that a swimmer in another group got separated from his boat and due to the bad conditions closing in around him, couldn’t relocate the boat. He swam ashore to wait for someone to find him. An alert was put out that a swimmer was missing. Our IRB and Jetski immediately went off in search of the swimmer, and quickly located him safe and sound. Huge thanks to James and Nathan and Arsenio for going to the rescue and assisting the other groups. It could have been a very different outcome, and highlights the importance of each swimmer having his own support crew. Thankfully, none of the swimmers in our group knew what had happened, and the four us kept swimming oblivious to the situation. At the same time Anna was quite sea sick, opting to be pulled out for an hour. Wayne, Ali and I pushed on, determined to round Long Reef and hit the home stretch. 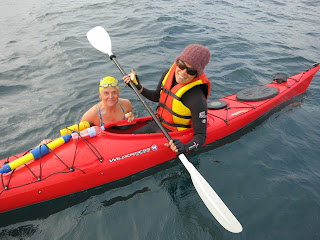 Long Reef was the hardest part of the swim. It loomed ahead of us for hours and it felt like it took an hour to pass. Because the headland goes so far out to sea, our line was really far out at sea. We kept looking at the land to the right and the reef we had to skirt and it did not feel like we were making any progress. Finally we made it to Long Reef. It was a real highlight seeing the bottom, a welcome change after looking into the deep, deep blue for the previous six hours! Then finally we were past Long Reef, ready for the final 8kms – the home straight! 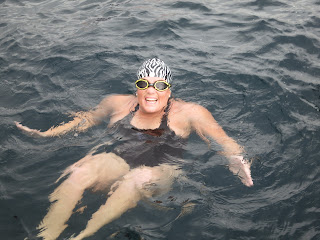 Around 2pm I was absolutely starving. I was eating and drinking every 30 minutes, but I decided that I needed something more. I asked Mum to pass me an Anzac biscuit and a piece of slice that she had baked for the support crew. Very quickly I realised it wasn't the best idea and whilst it tasted delicious, my tummy did somersaults for the next 30 minutes. At Curl Curl Anna found her second wind and dived back into the sea. Millie decided she could not be wetter if she was swimming joined us in the water too for the last stretch along Manly to Shelley Beach while Mum and Dad towed her kayak. We were all weary and really looking forward to feeling sand under our feet. At Fairy Bower the waves were pumping off the reef, and Wayne’s paddler Ryan caught a pearler in front of us - it was great to watch. 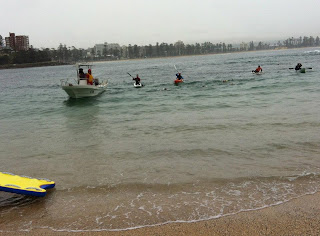 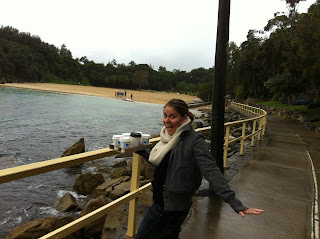 I could hear yelling and screaming and cheering as we swam into Shelley Beach. My mates Kate Mac and Tyzza had arrived to greet us with 15 hot chocolates. I think we all thought it was the most heavenly feeling ever standing on the shore drinking hot chocolates and rejoicing having made it. The entire crew was pumped. It was such an awesome achievement on such a grey and soggy day, and it was our biggest ever swim to date. The photos show the true elation we felt. I am so grateful to everyone who made it work for us, especially the rock star support crew: MandD, aka Gorm and Bear, Joe, Huw, James, Nathan, Arsenio, Ryan, Russell, Jenny, Illana and Millie. Of course massive fist pumps and thanks to Wayne, Ali and Anna who all swam so well for the entire duration of the swim and who kept me pushing my pace the whole way. If only we could swim side by side in the Channel later this year, it would be a piece of cake! Some of the swimmers from the other crews who started the swim with us came down to cheer us in too. It was at this point that we discovered we were the only group who had made the distance.
Total distance swum: 28km
Total Time taken: 8 hours 20 mins 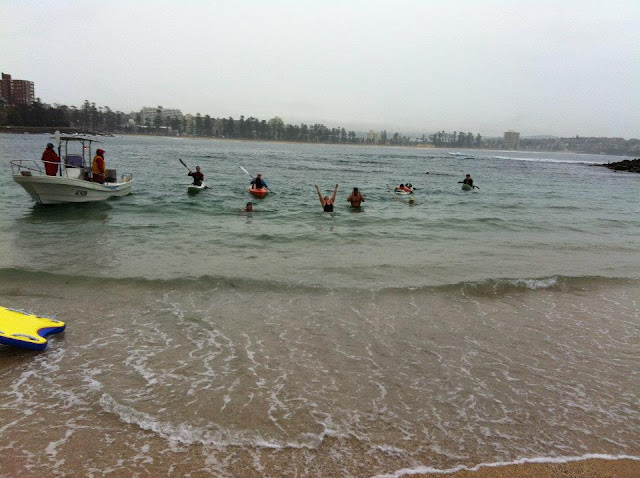 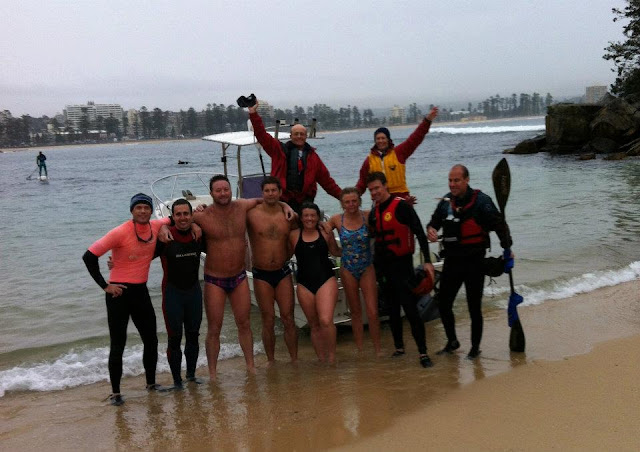 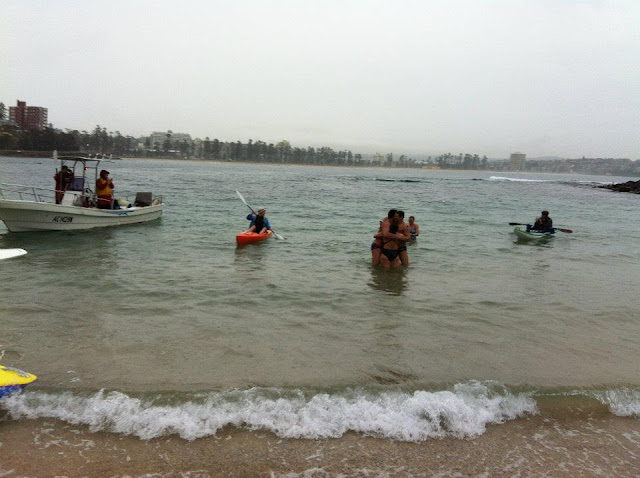