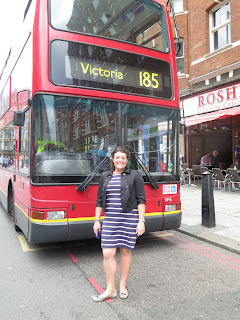 It is now the final week leading up to my English Channel swim! After two years of preparation, including over 2300kms swum in the last 12 months and some very serious cold water training and insulation gaining, I have arrived at goal week.
The reality of all this is still sinking in! Mum and I arrived in London last Friday after a great flight on Qantas with plenty of love from the cabin crew who were very excited for the challenge ahead. Aussie Olympic swimmer, Stephanie Rice, was also on board. Olympic fever is definitely in full swing over here! We headed down to Dover Harbour on Saturday with a lift from a fellow Channel swimmer I had met through Twitter. Social media has been a huge help to me during this challenge and I am amazed at the huge network of people Twitter has connected me with around Channel and ocean swimming. Kristy, along with Twitter pals Tory and Deidre were kind enough to share the 1.5 hour drive to Dover with us and give us an update on what’s been happening on this side of the world. 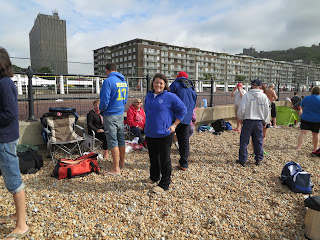 Arriving at Dover at 8.30am on Saturday the day was cold, grey and very, very windy. Decked out in beanie, trackies and ugg boots we made our way across the stony shingle “beach” to a cluster of what could only be Channel swimmers headed up by Freda Streeter “the Channel General”. Freda was far less formidable than the first time I met her two years ago. I told her my slot was ten days away. She asked “how long would you like to swim?” I had decided five hours would be my goal today - mentally I needed a long swim in the cold water to know I could still do it and five hours would allow enough time to recover before the swim. After today, I would be on my taper, which I was very excited about. 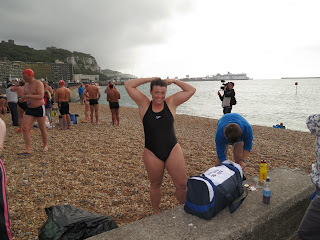 I hit the water with about 30 other solo swimmers all training for their Channel slots scheduled for some time over the coming three months, and some who are training for next year. We swam for two hours in loops around Dover Harbour, before stopping for our first feed and then every hour on the hour we stopped for another feed of a warm drink of Maxim carbohydrate, a banana, a chocolate or jelly baby. It is a great system, everyone gets given a number which is written on the back of their hand. When you come into feed, you get your number marked off. This enables the beach crew, who are all volunteers, to know exactly who is out in the harbour at any time and who might be missing! The camaraderie amongst the swimmers and beach crew is amazing as everyone comes in at the same time and buoys each other along encouraging each other to “just keep swimming”. Two years ago, this was the longest swim I had ever done. I will never forget getting out of the water after five hours - I was so cold. Two years and countless hours and kilometres of cold water training later, the five hours felt blissfully short. Mentally, I needed to swim for five hours to be able to compare the pain pre-Channel training to now. It is very reassuring to know that the training to that degree has paid off! 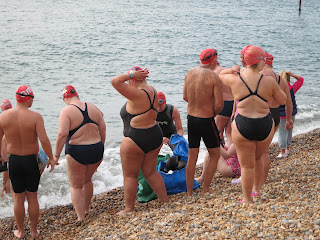 The wind was a strong Force 5-6 and the water was very rough. After five hours beating into the wind and fighting some very uncomfortable conditions in the harbour, I was done. It was a good test of everything I had trained for, and I felt mentally and physically ready. The full tide was now an ebb tide and it was a long climb back up the beach covered in worn, walnut sized pebbles. It was now time to spend with the shore crews and swimmers absorbing their knowledge and advice. Freda’s daughter holds the record for the most Channel crossings ever, 43 times in fact, so Freda knows a thing or two about this challenge. I also met a couple of swimmers who were attempting their solo’s in the coming week. 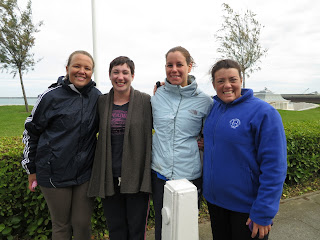 Once Tory, Kristy and Deirdre had finished their 6 and 7 hour swims respectively, we headed back to London. I would be working in our London office this coming week, whilst I acclimatised to the timezone.  Kristy kindly offered that I could join her and her swim club in The Serpentine in Hyde Park. Yes, they actually have a swim club in the middle of the man made lake in Hyde Park that is filled with geese and swans! 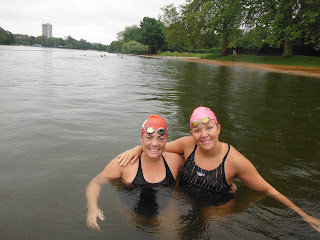 The week kicked off with terrible weather, it felt like we were back in Sydney winter - grey, wet and cold. I headed off to Hyde Park on a Barclays bike each morning. The Barclays bikes are situated all around London and for 1 pound a day you can ride for 30 minutes at a time to any destination with a bike rack. Similar schemes exist in Melbourne and Brisbane and they are just a fantastic way to get around the city - especially at 6am! It is a 15 minute bike ride from where we are staying to Hyde Park. 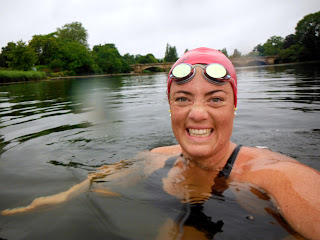 Each morning I have met Kristy and/or Tory and we have swum lengths of the Lido - a 400m circuit exists and it has been great to stretch my arms out, and do some cruisey taper swims. I was actually still pretty sore from Saturday’s rough seas for the first half of the week, so it has been really good to just focus on long, strong, slow strokes and enjoying the sensation of swimming. Dad arrived on Wednesday morning and was straight onto the bike and into The Serpentine doing his own triathlon and keeping me company for the rest of the week. The Olympic open water marathon swim and the triathlon swim leg are both on the same course that I have been swimming daily. This is the most amazing year to be training in London for my channel swim knowing that only weeks away the Olympians will be doing their best here too although there is still a lot of pond weed that needs to be cleared out pre- Olympics (apparently that happens next week). 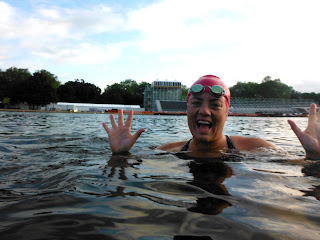 Over the course of this week, the Serpentine Swim Club members have been more than welcoming to me. They enthusiastically ask about the upcoming swim and all have wished me well. They also have a very civilized routine where you have a cup of tea, and if you are lucky, a biscuit, after you swim. The English certainly have style!
The Channel looms ahead of me and is only days away. This week has been quite a roller-coaster. Four solos out of 9 have made it so far. Right now, I am on a massive high. One of my swim buddies, Lochie Hinds, has just completed the Channel in 12 hours 22 mins and landed directly on Cap Griz Nez in France. Inspirational stuff. Lochie came with us to Melbourne for our cold water camp and I spent a good chunk of the eight hour swim side by side with him. Watching him all day on the GPS tracker and hearing the news that he had made it has buoyed me measurably. Not only that, but he is only 16 years old, and has just become the youngest Australian male to complete the Channel. Awesome work!
The conditions are really tough this year. The UK has experienced the wettest and coldest June on record (and their records go back hundreds and hundreds of years)! Subsequently water temperatures have not risen above 14.5 degrees Celcius. Lochie endured temperatures of 12C for much of his swim today. I was originally expecting water temperatures of around 15C, so this has been quite a blow to the plans. However, weather is what it is and there is nothing I can do but have trust in the two years of preparation I have put into this. I don't think there is anything more I could have done. Specifically for the cold, I have had cold showers for a year, not worn a wetsuit for two winters, endured regular 6-8 hour swims in 14C water temps, traded a social life to do night swimming at Redleaf pool in Sydney Harbour, worn summer clothes in winter, and gained 10 kilograms for insulation purposes (I won’t deny I had a blast doing this!!). I have also swum in San Francisco in 10C water, and did a cold water training camp in Melbourne. My body is ready, and my mind is prepared for battle! 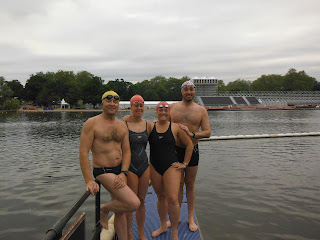 Dad arrived from Sydney this week, followed soon by my sister Bel, and this weekend my brother Mark will join us from Hong Kong. Team Tori is nearly complete! We move down to Dover today where we will be based at Varne Ridge Caravan Park, home of the Channel swimmer, until my swim occurs. It is amazing that my family have all given up their annual leave to come hang out on the Kent Riviera, and I am truly lucky to have their incredible support over the last two years of preparing for this challenge!

My swim window opens this Tuesday 10th July. It is completely weather dependent when I will swim, and I await notice from my captain Mike Oram, on his boat Gallivant, as to when it is my time to go! The weather, other than water temperatures, is looking promising for next week! Bring it on!


My English Channel swim window runs from July 10-18 - my swim day is completely determined by weather and priority order of booking. I was booked in Position 2, which means I have second priority out of four swimmers to pick the swim day.

Twitter @torgorman which also appears in a feed on the right hand side of my website www.torigorman.com.au will keep you updated as I swim.
My boat is called “Gallivant”, captained by Mike Oram, and the link to watch the tracker can be found at the top of this website: http://www.ais-doverstraits.co.uk/ The position will update every 10 minutes showing my progress. The course I take will more than likely look like an “S” as the tides and currents are very strong. My goal will be to hit France before Cap Gris Nez, otherwsie the current and tide will make it near impossible to hit land until the tide turns.