My official swim window here in Dover is over, but this challenge is not! Unfortunately the gale force winds have not abated and I have had no opportunity to swim. They call it "being blown out". (And that's not the forced weight gain!)
After Lochie Hinds' successful swim two weeks ago, ten days followed with no success. Gale force winds ensured that no boats even ventured out for eight days straight! The twenty boats that pilot Channel swims all stayed put in their marinas, and the 40+ swimmers awaiting their opportunity to take on the Channel, anxiously watched for a break in the weather.
During this time, there was a great deal of tension building in Dover. Many swimmers were on restricted timetables, unprepared for such a long period of poor weather in July. Thankfully my parents and sister are over here in Europe for a few more weeks, planning stops in Italy and France post the swim. We might be sacrificing the holiday for another week in Dover, but at least I can stay and have my shot at the Channel.
Unfortunately, my brother Mark, didn't have the luxury of time, and with the prediction from my pilot over the weekend that my tide would be completely blown out, we sent him home to Hong Kong. As I waved him goodbye, I finally cracked and had my first tears over the situation. It meant so much to me to have all my family here for this life achievement. My parents, brother and sister have been very involved in the whole two year campaign to get me here, they have all paddled, navigated and supported for me in at least one 20km swim during the last 12 months alone. Mark had been particularly attentive over the last three months with a daily text message of encouragement or just checking in on me from Hong Kong. He has also become an avid photographer over the last six months, and was meant to be documenting the journey over here. Losing Mark was a real blow and left me very disappointed, but I do realise my situation could be far worse. I am still able to swim the Channel, just not when I was meant to!
Staying at Varne Ridge Caravan Park has been awesome. I had met some wonderful swimmers, joining them on a dusk swim from Kingsdown to Deal (5km), hung out in the caravans chatting and have been reunited with my SwimTrek guide, Kathryn, from Malta 2009. It is one VERY small world! The Irish  contingent were especially entertaining, and having chatted on Twitter with some of them, it was awesome to be hanging out in person. David and Evelyn proprietors of Varne Ridge are very positive supporters  believing that the weather will eventually turn “Hang in there” they say daily!
After eight days of no Channel swims, a very good Irish swimmer, Rob, got the call he was up the next morning. He set off in tough conditions with the expectation this would ease, but after 13 hours and 4kms off the coast of France, the tide changed and started forcing him back out, the weather had been deteriorating and Rob was out. It was a devastating blow for everyone back at base camp, and I can’t even begin to comprehend how Rob must have felt. Whilst that was going on, another Irish, Craig, who is really an Aussie, got the call from his pilot that he was out the next morning. Thankfully this day the conditions held long enough for Craig and another solo swimmer to hit France in just over 12.5 hours. They battled with 30 knot winds for the last few hours of their swims. It did not sound pleasant at all, and I was very glad my pilot had not suggested I should head out.

With the knowledge that I wouldn't be swimming for at least five days, my sister decided to head up to London to catch up with friends and Mum, Dad and I headed to Greyshott for a night to visit my cousins, David and Susie Fuller. My aunt and uncle who are currently awaiting the overdue birth of their first grandson in London, also came down and we had a big family lunch which was fun. The following day we headed back to Dover via Brighton, with gale force winds blowing 30-40 knots, and horizontal rain. It was a horrible day! Thankfully we found great respite in the Brighton Pavilion which was built when King George when was Prince Regent and decorated by Thomas Nash of Buckingham Palace fame. It was pretty sensational! And amazing as it might seem, the decoration and design of the dining room literally left me speechless! 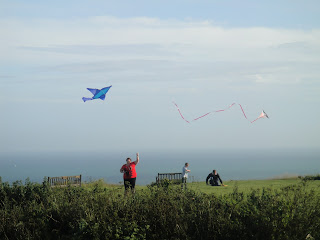 Our ‘home’ on top of the White Cliffs of Dover has the most spectacular views, especially as we watch the storms come through. Whilst the photos might look like it’s lovely, it changes so quickly - Melbourne's four season's in one day has nothing on this - it's like four season's in an hour! I have only been able to see the coast of France three times in the last week. On Bastille Day night however it was exceptionally clear  and we could even see the fireworks on the coast of France. That was special.


The Olympic fever is is full swing in England. Tonight the torch relay came through the centre of Dover. I never thought we would still be here at this point! Dover has been spring cleaning itself to be ready for this big, spectacular night. We had perfect weather yesterday, while today torrential rain meant the concert had more security guards than attendees.
The roller-coaster continues. Yesterday weather looked set for a guaranteed awesome swim conditions over this weekend. Today the reports are not so spectacular. My boat captain hopes conditions will improve and he can get me out in the water by the end of this weekend. I will now be swimming on a Spring tide. This means that the tidal range and velocity of the water is far greater. Next week is seven metre tides! Potentially a slower time but all I care about is standing of French sand/soil/rocks having swum there! My parents and my sister wait with me patiently to conquer this dream. I am not giving up hope, and the delays will no doubt only make me more fiercely determined to hit France!