Rottnest Channel 2013 - Return to the water! 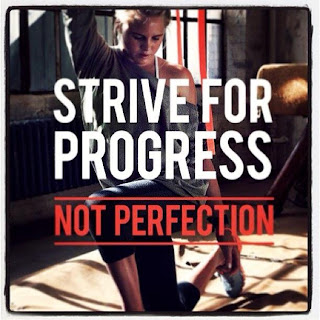 Signing up to the 2013 Rottnest Channel Swim in November 2012 seemed a little bit crazy. Considering I couldn’t even swim when I booked my spot, I knew I was going to pushing it to make the 20km distance. My body was still recovering from my July 2012 English Channel swim where I impinged all the tendons in my left shoulder and cut off circulation for the last 6 hours of that swim. I had spent three months in physio, and that entire time out of the water… and whilst a break was welcome after the two years I had spent training non stop for that goal, the frustration of not being able to return to the water when I was ready was extreme.

I sought out a new physio, Tom Brydson at SportsLab Double Bay who encouraged me to get back into the water and we would work through the training and strengthen the required muscles as we went. Officially hitting the water in full training in December, I was aware I had a long road ahead of me to return my body to swimming distance again!

It was not only physical rehab that was required to be able to swim distance again; my mind needed some rehab too. Thankfully my amazing squad members at Vladswim and my wonderful coaches Vlad Mravec and Charm Frend were able to provide me with great support and help me find my love for the water again. 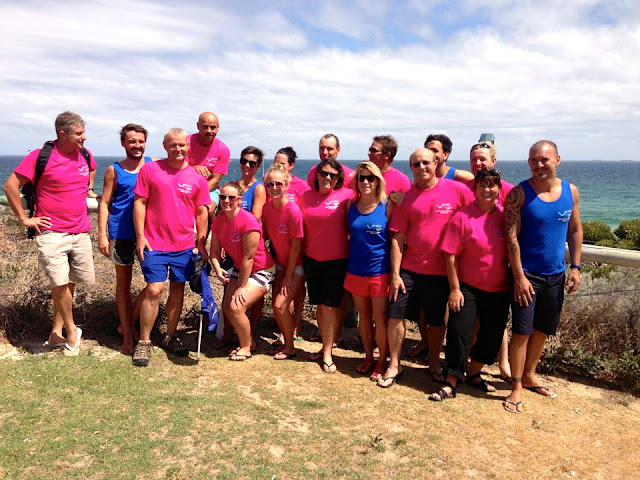 In the first week of December 2012, I was accepted to race around Manhattan Island 2013, a marathon swim of 46kms, and knowing that I would be on the start line on June 8, 2013, alongside only 40 other swimmers, I knew that Rottnest Channel would be a key race to getting myself ready both mentally and physically. There is nothing better than a short term goal to get one back in the water. 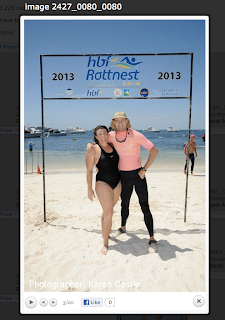 December through February I battled physically and mentally to tick off the kilometers. I was lucky enough to have 13 other squad members swimming alongside me who had also signed up to Rottnest solo as well as my Dad and sister who had signed up to do a duo. This year would be even more of a family affair than usual!  Thankfully my incredible paddler and friend, Joe, had signed up to support me once again and my mum Yvonne would support me on the boat. After finding myself a new boat driver, Team Tori was complete.  And, after 10 weeks of training, Rottnest Channel was actually here again!

Preparation for these races is a key component. Mornings consisted of squad training at Andrew Boy Charlton Pool in Sydney, and Saturdays our squad did long swims at Bondi, Balmoral and Botany Bay. Sundays allowed me to enjoy the 1km and 2km races on the Sydney ocean swim circuit, and the best part of it all, the sausage sandwich afterwards!

Arriving in Perth on Thursday, the excitement was evident amongst the Vladswim crew. We had a team meeting with all our support crews and it was amazing to see how many of the swimmers had their families and friends with them this year. My sister had organized Vladswim team t-shirts in hot pink and blue and as soon as everyone donned them, you couldn’t miss any of the members of our Sydney squad or their support crews! 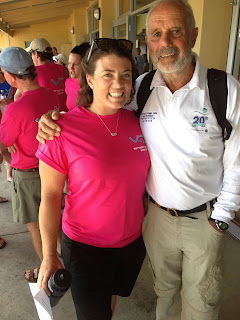 The next day was the race briefing for all interstate competitors. Whilst at the briefing I met Dieter, whose 80th birthday was that day. Rottnest 2013 would be his 15th solo swim. What an inspiration!

My pilot Mike and the team sat down and planned logistics for race day the following day. It was quite a different experience knowing that Dad would be on a different boat to us and he and Bel, along with their skipper James Edelman (a mate from Sydney living in Perth) would be swimming their own race. Thankfully Mike was super lovely and switched on and I knew he would look after Mum, Joe and I for the day.

This race was never going to be my best, but it was an important milestone in my training. It would be the furthest I had swum since the Channel, and since I would have to swim double that in New York 3.5 months later, I needed to do this mentally and physically. 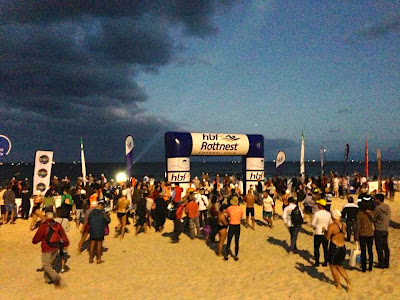 Race day! I hit the water on the first start at 5:45am and swam towards the can that Joe and I had met at the last two years. Unfortunately for me this year, the can had not been laid and try as I might I couldn’t find Joe. The sense of desperation in the water knowing I looked like every other swimmer with boats and paddlers everywhere around was strong. Finally I heard Joe’s voice yelling at me. Yay! I was found!

Onwards we swam, past the Celebration vessel and into Rottnest Channel. The first few km’s were a good warm up and by 5kms in I hit my groove. The next 6 went well, and then I hit the wall. Not surprising since I hadn’t done enough distance work over 12kms. I went into the pain locker and there I stayed for the next 3 hours. Joe was fantastic at trying to distract me with photo shoots, and making faces, but I was well and truly in a hurt locker that I knew I had no choice but to endure. The kilometer splits slowly crept up, and Joe tried to keep me cheery, but he could see the pain on my face as he read out each split.

By the time I got to Phillip Rock, I knew that this time last year I was celebrating on Rottnest Channel. It was definitely not a fast swim for me, but when I hit the finish channel I was stoked. I crossed the line in 6 hours, 32 minutes. My shoulder had held up the whole way! Twenty minutes later, my Dad and sister crossed the line in 6 hours 50mins. It was an awesome day and so wonderful to share it with my family!

The Vladswim crew delivered some amazing results this year, not surprisingly under the awesome coaching of Vlad and Charm. In the men’s, Ian Melhuish came 3rd overall and Greg Schien came 4th. In the women’s Zoe Whitfield came 4th and Tara Diversi 5th overall. It was a great achievement by the entire squad as everyone made it!

So, next steps from here are to knuckle down and start hitting the miles. Knowing my shoulder can take the distance again, and with 14 weeks to go, this was the perfect shake up I needed! 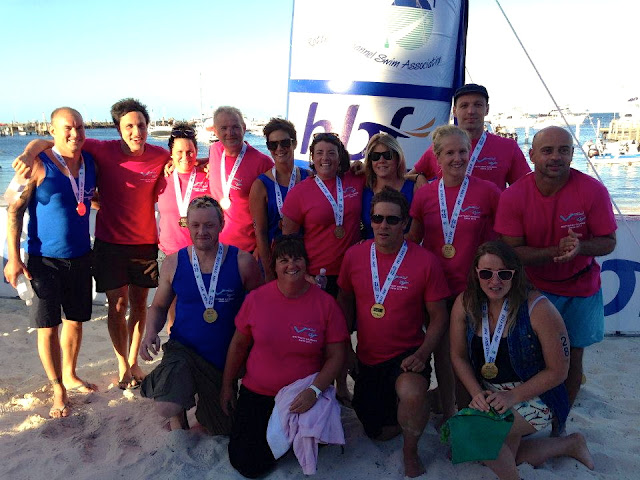 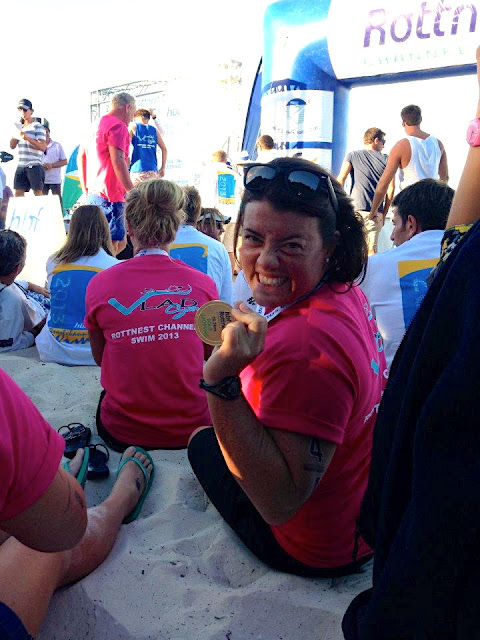