In April, 2013, my coaches at Vladswim ran their annual Cold Water Camp in Port Phillip Bay Melbourne for aspiring English Channel swimmers.  A four day camp, with multiple daily swims and lectures, culminating in the camp challenge: an eight hour swim in 15C water. I completed this last year as part of my own EC preparation, and I was keen to participate again in 2013. Once again I would test my ability to withstand the cold. It has been nine months since my own Channel swim and having lost 7kgs of my Channel fat, I was keen to see how I would fare in the cold and at the the same time it was a great opportunity to get a nice, long swim in preparation for my upcoming Manhattan Island Marathon Swim race in June.

Twelve swimmers from Sydney journeyed to Melbourne for the camp, along with our amazing coaches Vlad and Charm assisted by Martin (the King of Goulash). Work commitments for the week allowed me an abridged version of the camp, but my key goals were a couple of long swims in very cold water, and the opportunity to share my experiences with the group heading towards their own goals of conquering the English Channel in 2013 and 2014. 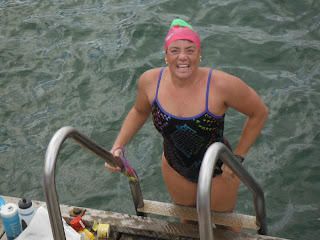 My first swim with the group was Friday morning. The goal was three hours in Port Phillip Bay off Brighton Baths. In 2012, this was the hardest swim of the entire camp. This swim is a huge mental challenge - freezing, and hating it and knowing that the next day you have to swim eight more hours. This is the swim where most people question why and what they came to do. The group struggled, including myself. Even knowing I have done it before does not make it any easier!

The sensation of jumping into 15 degree water is quite shocking. For the first two minutes your chest restricts, your head hurts with a massive ice cream headache (and without the benefit of having eaten yummy ice cream), and you flail around. As you start swimming your body feels tight and it feels very hard to stretch out in your stroke. Then after about 2 minutes, the intensity eases and you almost drift into a state of heaven. Your body has at this point reached a nice numbness and your breath calmed down and each stroke seems easier.  This point of numbness doesn’t last however, and slowly over the coming hours your body aches and fights the cold, your hands and fingers curl (the dreaded “claw”) and you feel the cold seep into your core. As you get colder there is no hope of warming up and this is where the games begin as you challenge yourself to push through the physical signs which are telling you to stop before you get hypothermia and the mental knowledge that you can do this, you just have to push through.

By the end of the three hours, some had pulled out early and were mentally and physically spent – with the impending doom of eight hours ahead the next day, there were lots of doubts hanging over the team’s heads. When I got back from work that evening, the team had regrouped, swum again in the afternoon and had prepped their nutrition plans for the following day. It was a great opportunity to have a good chat and share with them my similar experiences in 2012.
Tomorrow was do or die, they could do this, it was the camp goal and the reason they were there, and they had to break through the physical and mental barriers they would face, because that was it. After the eight hour swim there would only be a couple more short Cold Water Swim Camp sessions and they had already ticked those boxes.

For the eight hour swim, we joined forces with the fantastic Melbourne Black Ice swim squad. In preparation for the challenge the next day, we had dinner on Friday night and it was great to see so many familiar faces from last year. It was thanks to them that we would have such an awesomely organized event the next day, with hot water urns, support crew, support swimmers etc., all the things that make it possible to achieve a crazy goal like swimming eight hours in very cold water! 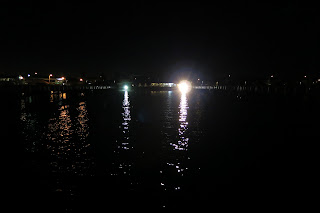 The day began at 5am. The house was a hive of activity as thermoses were filled, last minute bags packed and we trekked down to Brighton Baths ready to hit the water at 6am sharp.

The sun had not yet risen so everyone donned glow sticks and flashing lights and headed out between the bars into Port Phillip Bay. There is something quite surreal about swimming from the darkness and into dawn. It is such a calming experience….and that is certainly something coming from me!  As the pinks, oranges and yellows filled the sky, I was reminded of the poem “Red sky at night, shepherds delight, red sky in the morning, shepherds warning” and just hoped with all my might that the day ahead would be a good one! 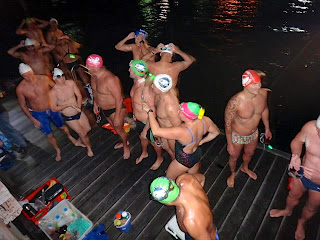 The water was icy, and with no sunshine on my back to warm me, the first few hours were difficult. I found it very challenging - I had no-one of equivalent pace to swim with, and spent almost the entire day swimming on my own. This is a very lonely experience and in a training swim adds to the mental challenge ahead. The “claw” had begun at the end of the second hour meaning my swim catch was less effective, and I could definitely see that my toelerance to the cold water was greatly impeded by the loss of some of my Channel weight. Thankfully, company arrived from Black Ice swimmer Doug on hour 2.5. This saved me, because at that point, I was really questioning my ability to make eight hours and wondered if I could pull out at six. I also knew that fellow Channel swimmer and MIMS swimmer, Dougal Hunt, who had been one of my great Channel supporters in the lead up to 2012, was coming down to support me, and knew he would be shocked, surprised and disappointed if he found me out of the water. Ego can be a very powerful tool if you know how to harness it properly!

Onwards I swam, focusing on ticking off each loop. I was swimming out to the poles, around the breakwater, through the marina and back to the baths, a 2.7km loop taking roughly 45 minutes. I calculated I had 10 loops to swim that day and focused on getting to 5, and then working my way back down to 0. 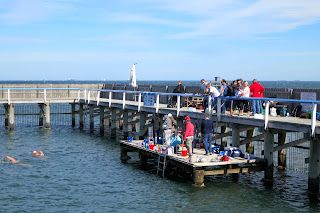 The support crew on deck at Brighton Baths were amazing. Every time I came in, people would grab my bottle, food, painkillers, basically anything I asked for and pass it down to me on a bucket. I trod water for five minutes or so (very luxurious, normally I feed in sub 30 seconds when racing!) and would have a chat, lingering to avoid the inevitable! Eventually, Andrew Vidler from Black Ice, would yell at me to get going again, and plead as I may, I knew there was no getting out yet!

At five hours, Vlad joined me on his kayak. What a coach! By now the wind was up to 35 knots and it was extremely rough. What is that rhyme about the red and orange dawn? Vlad took it all in his stride, paddling amongst us all rotating round and round, making sure we were ok, and watching our technique and correcting our stroke. It was great to have him by my side for half and hour and helped me pick up my pace and break the monotony.

The support crew throughout the entire day was simply amazing. Coach Charm was on deck all day long, checking our stats and making sure everyone stayed safe. After 2012, where two of our swimmers went hypothermic, there is a very real danger is these swims. There was a lot to manage with sixteen swimmers in the water. The professionalism and organization by Charm and Vlad and the Black Ice team made it a very safe experience for us all. 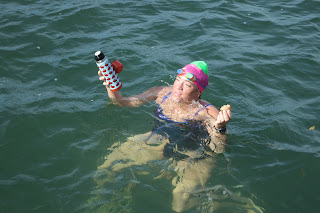 However, the highlight of my day came at the six hour mark when I was treading water drinking nice hot black tea with stacks of sugar and dreaming of scones. I precociously asked if anyone had some scones to go with my tea, where upon a freshly baked muffin by the wonderful Sandy from Black Ice appeared in my bucket! I couldn’t believe my luck: hot tea, fresh muffin, smiling support crew, if I wasn’t freezing in the water, I would have thought I was on holidays! Sandy said there would be one more waiting for me when I finished… well that was one delightful thought for the next two hours!

Of course with the multiple laps we were all doing you do come across some of the other swimmers. We all took the opportunity to have a quick chat where possible, after all today was about time in the water, not the distance. “Team Awesome” (Ben, Cae and Rachael) stayed together the whole day – and amazingly achieved a milestone none of them thought possible. I was so super proud to see them lap after lap, especially after the previous days of self-doubt.

Finally it was six minutes to go and we all entered the Baths to be told the magic words “two laps of the baths to go”. None of the other swimmers had watches so they never had any idea of how long they had been swimming, a great training technique for a Channel swim, as you never know how long it will take you. Thankfully I was allowed to keep my watch as I was practicing my pacing and needed to get my kilometre splits to keep an eye on that. We all sprinted two laps of the Baths and joyously climbed out of the water to cheers, claps and hugs. What a great day!

I was so proud of the Team, they had all achieved an incredible milestone towards their own journey to the Channel, and in doing so had gained a vital mental toughness that would serve them well in their challenges ahead. And by doing it with them, it kept me going when I really would have rather-ed not!

Our amazing coaches and the amazing support from all the Black Ice crew and each other had made the day possible, and I am so grateful that when I took up this crazy sport, that I have been able to find so many people willing to help me achieve my goals, and be able to share in my training buddies achieving theirs.

Not long after emerging from the water I was on the plane heading back to Sydney. After a quick twelve hour stopover at home I was heading to the USA to embark on one of the toughest challenges in my swimming career – S.C.A.R: a four day stage race through four canyons in Arizona, covering an approximate distance of 68kms. The excitement about this challenge was palatable, and I was stoked that my mother would be joining me as my support crew to paddle a kayak beside me the whole way. Definitely a new take on mother/daughter bonding! 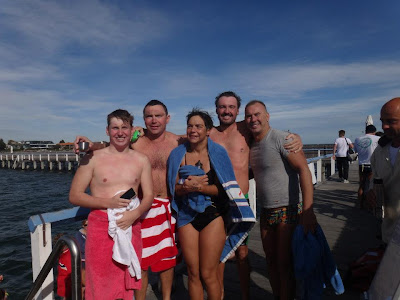 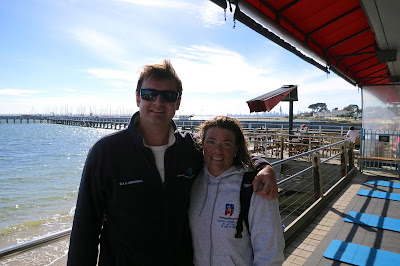 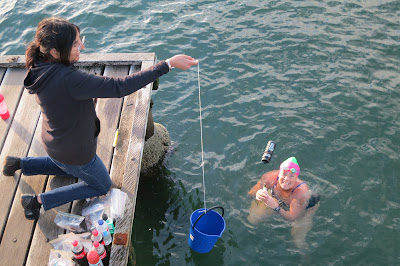 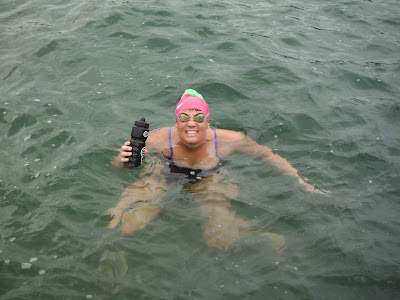