Return to the water - and the next challenge!

2015 has seen my return to the water. It’s hard to believe that 12 months ago I hung up my googles and cap for a year break from the sport that had defined me for the previous 4 years.

That decision led to a rollercoaster of a year, but at the end of last year I decided I missed feeling as happy as I do in the water and that I had unfinished business to attend to.  It was time to complete the Triple Crown of Marathon Swimming, with a 33km swim across Catalina Channel from Catalina Island to Los Angeles. 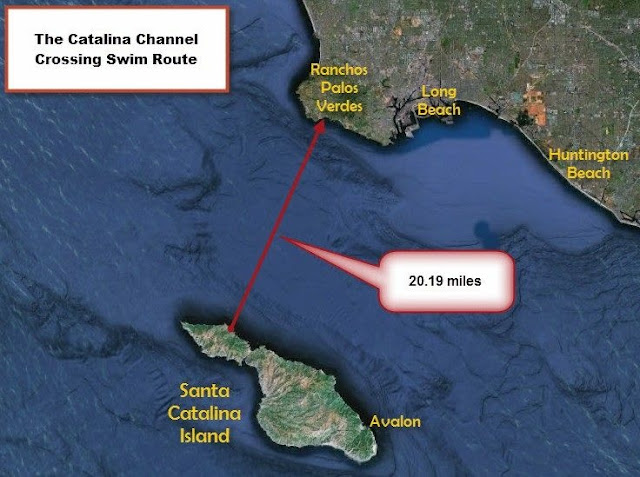 I returned to the water on January 12, 2015, and to my coach Vlad Mravec at Andrew Boy Charlton pool in Sydney. I love this pool; training in an outdoor 50m pool means that every single day starts differently with a unique sunrise and this year we have had some absolute beauties.

The first few weeks felt great in the water. I was actually quite surprised at how quickly I picked up to my old position in the lane. I would definitely credit the amazing strength and conditioning I had been doing for the previous 6 months with The Original Bootcamp as a key reason for this. My body was strong and my mind was stronger. Two weeks after I returned to the pool, I approached coach Vlad with the goal of wanting to swim Catalina and that I wanted to do it this year. Would this be achievable? Would my body be able to bounce back into hard core distance again in just 9 short months?

I am not sure I actually gave Vlad a choice. My long suffering and ever supportive coach just smiled at me, with that smile of “here we go again”. He knows that once I set a goal, that’s it.

The next few months were great. I started every morning with pool or land training and was thrilled to be back with my swim buddies. I spent weekends ocean swimming and surf training and got back into the 2km ocean swim races on Sundays on Sydney’s beaches. Getting back on the podium so quickly was an added thrill.

In February, my American friend Grace van der Byl came to stay with me for a few days. Grace is a phenomenal swimmer, with 13 World Records to her name, including the fastest female across Catalina Channel. We originally met in Arizona at the S.C.A.R swim in 2013 and forged a special friendship over the four day, 70km stage race. Just six weeks after S.C.A.R, we reconvened in New York for the Manhattan Island Marathon Swim, cementing a friendship which I am confident will last for life. When Grace arrived in Sydney I told her about my goal for Catalina. She was stoked and so supportive and I knew that this was going to happen. There is nothing like the upbeat, super confidence of an American to make you feel invincible. Grace spent the next three days sharing insights and tips with me and my coaches about the swim and I told my training buddy Marty that I would be joining him in swimming Catalina Channel that year. We were excited!

From February to now I have been setting goals to challenge myself and push my body right back out of its comfort zone. I have been amazed how quickly the muscle memory kicked back in. 11 weeks after my return to the water I headed to the Gold Coast to race in the 10km Easter Swim from Burleigh Heads to Surfers Paradise. Three weeks later, I headed to Melbourne for Cold Water Camp – a phenomenon that can only be considered modern day water torture where over 4 days our coach Vlad puts us through eight training swims both day and night in 15 degree water, culminating in an eight hour swim in Port Phillip Bay. 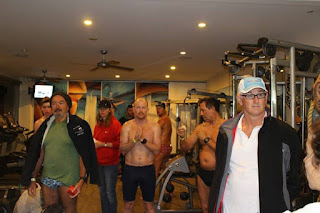 This was the ultimate mental challenge. If you can get through Cold Water Camp, then mentally you can do anything. Two hours into the eight hour swim I hit a massive wall. I questioned what I was doing. Realistically I hadn’t done enough preparation for the camp, having not done any cold water training for the last 18 months. I was also tired, having already swum 20kms in the previous 36 hours. And to top it off, I hadn’t swum 25kms in one hit since June 2013 – almost 2 years previously. The conditions were rough. The water was freezing (15.4 degrees). The sun hadn’t yet risen and I really wanted to change the eight hours to just six. This little mental war went on in my head for the forty minutes it took to swim around the marina. And then as I swam into Brighton Baths for my next feed I saw a bunch of the guys who were training for their English Channel swims. I knew how important it was for their mental confidence to achieve the 8 hours and I also knew that I needed to be there for them. I sucked it up, reversed my mental state and then spent the next 20 minutes telling myself that this was the choice I had made and how I needed to do this today if I wanted to do Catalina in 5 months time. This sport is definitely torturous – both physically and mentally. 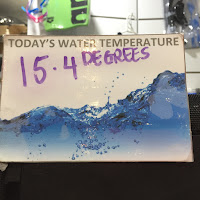 The day continued on, and round and round the marina I swam, picking up some of the other guys at various points and swimming side by side for a lap. Watching one of my training buddies going down with hypothermia was yet again a frightening experience. Normally much faster than me, I physically had to drag him for his last lap of the marina. Once we got him into the pen I was relieved – it is amazing watching someone go down with hypothermia and how everything slows, and their speech becomes drunken. I was so impressed that he continued for another hour within the baths under the watching eyes of our coaches Vlad and Lawrence before being pulled out.  Solid effort.

At the end of the eight hours I was stoked. I had made the time and the 25km distance goal I had set myself and I knew I still had the mental game I needed for the challenge ahead. 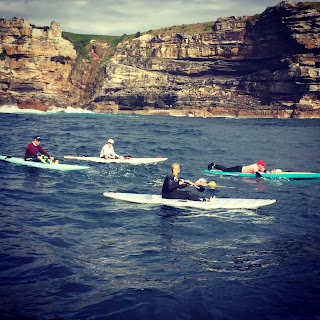 Four weeks later I returned to my favourite swim, Bondi to Watson’s Bay. This 10km swim is along a spectacular section of Sydney coastline and at the 8km mark, sees participants swim through Sydney Heads. It is an amazing experience. I have an amazing rockstar support team who step up for me every year for this event: my ever trusty and incredible Paddler Joe, who having had his second baby just three weeks prior to race day was a total star to get back on the water with me; my long suffering best friend Amelia who has never missed this race for me even though she gets terribly seasick every year, and then the additions of my sister Bel and her boyfriend James. Mum and Dad also accompanied on the boat alongside. I had the Flying V formation around me for the race, which considering how sharkie it is, is always welcome, because I am actually pretty scared of sharks!

I had a great race, even made the podium in third!

Two weeks later is was time for my next 8 hour training swim. For this years preparation, Vlad has set me an 8 hour training swim every month from April until the swim in September. With only one to go now I am actually finding having the monthly goal a good way to break down the weeks – 3 weeks build, one week recovery, 3 weeks build etc. I reached out to my friends via Facebook seeking paddlers for the 8 hours. This year I have been overwhelmed by the support from my friends who want to be able to help me achieve this goal. I am totally indebted to people for their time in keeping me safe from sharks while I spend hours in the ocean. This 8 hour swim proved to be a challenge not because of the sharks, but due to the stinging jellyfish that whipped us constantly throughout the swim. We all ended up with welts on our bodies and the sting in these seemingly pretty anemone was fierce. Over the eight hours my 10 support paddlers who cycled through in shifts were given the joy of hearing expletives firing from my mouth and would screams each time they hit. They sure did hurt and I still have a scar across my chest 8 weeks on.

Four weeks later I completed the next 8 hour swim at Manly, doing loops from Shelley Beach to Freshwater and back which is approximately 5km. We started this session at 5am to start building some experience of swimming in the dark since Catalina will begin at midnight. Whilst it was bitingly cold, we were rewarded with the most stunning sunrise. My favourite moment was accosting some guy running along the esplanade if he had a phone and could he take a photo of us and then text to to the mobile number we shouted across the water - whoops, sorry neighbours!!!

The next 50 days is the final slog to the goal posts and my key aims are to keep fit, strong and stay healthy. It is a very cold winter so I feel like dodging sick people has become my latest sport! As they say, it’s the final countdown!