Countdown to the Triple Crown!

Catalina Channel is just 9 days away. It’s hard to believe that after nine long months of training, that the goal is almost here!

I am certainly excited. Coming back to swimming after my 12 month break has been such a journey; and to be able to achieve such a big goal like completing the Triple Crown is such a thrill. It will definitely complete a big chapter of my life as my 22nd marathon swim in just five years. 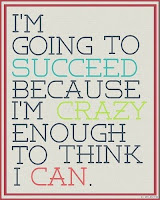 Setting a goal like this takes a certain determination, which clearly I have. It also requires a fair bit of crazy. I do sometimes question the sanity of my response to “What are you are doing this weekend” and thinking “I am going to swim for 8 hours consecutively”….  But it’s not enough just to be determined, you have to know what it is in life that will keep driving you even when you want to stop. For me, I know that once I socialise my goal, then I can’t back out. This year I have harnessed the social pressure that I put upon myself to continue to drive myself to go to training, to push out the extra kilometres and to get to bed to get enough sleep. Let’s face it, there are definitely days when you don’t want to get out of bed, when you have had enough and then days when you just aren’t hitting decent performance in the pool and you wonder if you will ever get faster or stronger. I’d just like to throw a shout out to you all for your amazing support via social media! It’s like a big hug and a kick up the butt simultaneously!


It also helps having an amazing group of swimmers to train with who have kept me company, kept me laughing and enjoying the hours in the water and who all have their own goals driving them. In the last few weeks, two of my training buddies Andrew and Dean successfully completed their English Channel swims and Justin Hanby completed Catalina. Marty awaits his Catalina swim tomorrow and then at the end of September, Des will finally get to swim the English Channel. Des’ swim will be pretty special; we trained together for the 2012 Channel season but he had to pull out ahead of his swim to have two shoulder reconstructions. It’s been a long road back but finally Des will have his turn to join the “Club” and I can’t wait to see him achieve this goal.

2015 has been an incredible year for marathon swimming. There have been some amazing new records from around the world, many of them by Aussies. Just recently Chloe McCardel, an Aussie from Melbourne completed a triple crossing of the English Channel. She is the first Australian to achieve this and only the 4th person in the world. This feat is so difficult that it has been 25 years since it was last successfully done. Remembering how tough it was just doing a one way crossing makes me marvel at her achievement – one that she has attempted and failed twice before, but never gave up on. That same week my Kiwi friend Kim Chambers, who lives in San Francisco, became the first female to successfully swim 30 miles from the shark infested Farellon Islands to the Golden Gate Bridge.  Another Aussie mate, Simon Dominguez, who trains with Kim attempted the same swim in the opposite direction the week before that and got just 3 miles off the Farrellon’s when a Great White circled him and his swim was aborted after 18 hours of swimming. 18 hours… so impressive. I am always so inspired and humbled following amazing swimmers around the world in their quest to conquer new and amazing records and waters.

Whilst my Catalina Channel swim won’t be a world record, it will complete the “Triple Crown”
of Marathon swimming for me. The Triple Crown consists of successfully completing the English Channel (34kms), Manhattan Island (48kms) and Catalina Channel (33kms). To date, 113 individuals globally have achieved this, of which, eight are Australians (5 males, 3 female).

The swim starts at midnight from Catalina Island on Friday 4th September. Yes – midnight. Pitch black, diving into the waters, with no shark cage, in just a pair of speedos, cap and goggles and then swimming for six hours at least until the sun begins to rise is a scary thought. Scarier still not knowing what is beneath you. I am, however, reassured by the fact there has never been a shark attack in these waters. In all my years of training and racing I have been very lucky to have had no incidents with the marine wildlife other than a small shark or two swim under me, and fingers crossed that luck continues. Last week on a Catalina Crossing, the swimmer had dolphins and a whale appear – now wouldn’t that bee a life highlight, fingers crossed!

In order to prepare for swimming in the dark, I have begun many of my ocean training swims at 5am and swum into sunrise to emulate the experience I will have in Catalina. It's been a cold, dark winter so this has been scary experience - especially given the propensity for sharks appearing in Sydney this year. Massive thanks to Liz Powis and Sonny Embleton who have gotten up at insane hours to be there protecting me on the kayak for these early starts. 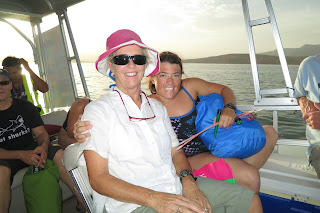 When my swim begins, I will have a support boat carrying my amazing mum and support crew and a kayaker in the water. Support crew is a key factor to achieving these goals, as there are a lot of logistics to be managed whilst I just keep turning my arms over hour after hour. For Catalina Channel, my mum Yvonne will be Chief.  She has never stopped her selfless and amazing support through my whole life, and I am so grateful she will once again be there alongside me.

For Catalina, a kayaker is also required. With my dear friend Grace van der Byl and her husband Neil being unavailable for my swim, due to the wedding of two other swimmers I met (and whom incidentally also met each other) at S.C.A.R – Darren Miller and Alli DeFrancesco, recruits were required. Salvation has come in the form of two of the most awesome and accomplished marathon swimmers and all-round good guys: Kent Nicholas and Dave Barra. Both these rockstars have completed the Triple Crown themselves and are experienced and amazing swimmers. Neither of them live in California! Kent runs the Arizona S.C.A.R swim and Dave just completed a 23.5 hour swim across Cayuga Lake, NY, and is also responsible for running the Eight Bridges Swim in New York. Kent and Dave have both committed to being my support crew for Catalina and will take turns paddling and as swim support for me over the twelvish hours I hope to take.

The Catalina Channel Swimming Federation, who are the official governing body of the swim, provide an official observer and assistant observer for your swim attempt. They are responsible for making sure you don't touch anyone or anything during the swim and ensure that you maintain the riles of marathon swimming. I am also excited that I have been allocated another wonderful person I met at S.C.A.R Arizona, Becky Jackman-Beller. I really have scored the most all-time awesome support crew!

I will also have an amazing cheer squad on the boat in the form of some American family friends Amy and Bill Morro who are coming to be my cheer squad. With their enthusiasm I wouldn’t be surprised if Amy even whipped out Pom Poms! It will be wonderful having them taking turns with the rest of my crew to keep watch on the little blinking light on the back of my goggles while I swim through the night.

The water temperatures are looking good for my swim, although there are cold patches at various points, I am confident that I am prepared for this with the large amount of cold water training I have done this year. I am hoping for water temps of around 19 degrees Celsius, which would be a dream in comparison to the English Channel and Manhattan Island, which both clocked in at 14.8 degrees Celsius. As with all my other swims, no wetsuits will be worn.

Swim kick off is midnight Friday 4th September ET/ 5pm Saturday 5th September AEST. I will have a tracker so you can follow my progress. Link will be posted on my blog: http://torgorman.blogspot.com

I am hoping the swim will take me around 12 hours, and look forward to hitting the beach at lunchtime Saturday at Point Vincente, Los Angeles, where I will have a beach support crew of some close mates from Australia: Andrew and Louise Hutchinson and baby Rosie as well as Mike and Jill Dunstan.

Only one sleep left in Sydney before I get on the jet plane!